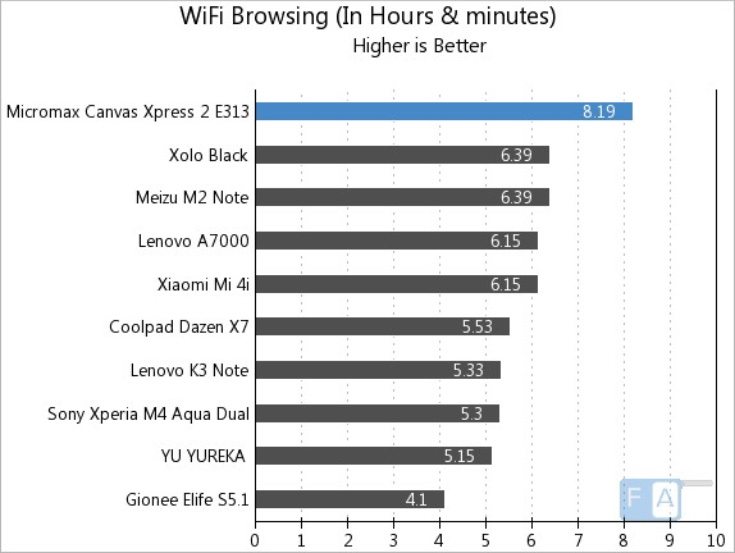 The Micromax Canvas Xpress 2 is a recent budget smartphone release that offers some value for money specs such as an octa-core processor. It packs a 2500 mAh battery, and if battery life is important to you in a smartphone you might like to take a look a look at the Micromax Canvas Xpress 2 battery life compared with other handsets. The testing showed it achieved rather mixed results.

You can check out our launch article on the Xpress 2 to see more on specs and the price of the phone, but for many people battery life is now a real consideration when purchasing a new device. Fone Arena has put this new Micromax Canvas handset through its paces with battery testing, and the results are split into four categories. They are Talk Time, 3G Browsing, WiFi Browsing, and Video Playback.

The results are then compared on tables showing the position that the Micromax Canvas Xpress 2 achieved against numerous other smartphones on the market. Just a few of the other handsets shown are the Lenovo K3 Note, Meizu M2 Note, Xiaomi Mi 4i, Xolo Black, and Gionee Elife S5.1.

In the Talk Time testing (image directly below) the Canvas Xpress 2 managed a time of 12 hours and 30 minutes. That’s pretty poor and put the phone right at the bottom of the table. The Meizu M2 Note and Lenovo A7000 attained top spot in this testing, both with a time of 33 hours and 19 minutes, illustrating the below-par result of the Xpress 2 in this respect. 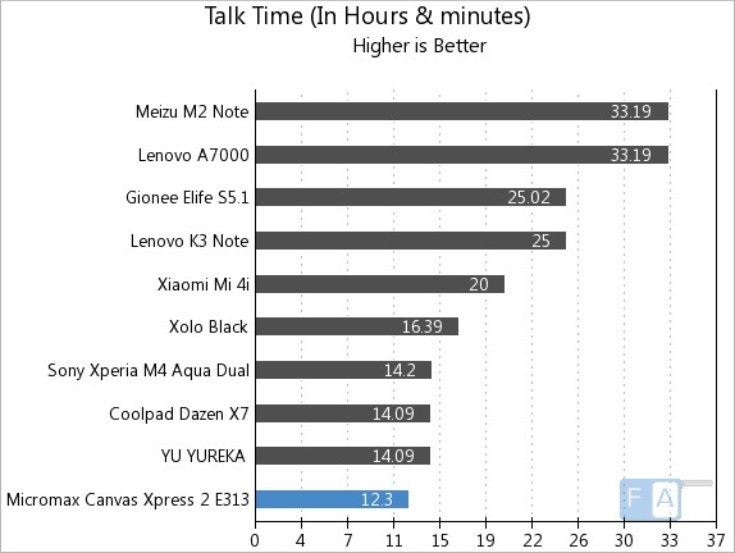 For the 3G Browsing test the result was a complete reverse. This time around the Micromax Canvas Xpress 2 was in first position on the table with a time of 6 hours and 39 minutes. The Lenovo A7000 and Xiaomi Mi 4i this time were in equal second spot with a time of exactly 5 hours. Surprisingly perhaps, the K3 Note and Elife S5.1 were at the bottom of the phone, both on 3 hours and 42 minutes.

The final testing involved Video Playback and the Canvas Xpress 2 was in the bottom half of the table. It managed a time of 8 hours and 19 minutes, the same as the Lenovo K3 Note. By comparison the Coolpad Dazen X7 and Xiaomi Mi 4i were in top spot with a time of 11 hours and 7 minutes. In last place was the Elife S5.1 again, this time on 6 hours and 15 minutes.

You can see the full results, other tables, and Fone Arena’s One Charge rating for the phone at the source below. It’s disappointing that the Xpress 2 achieved such a poor showing in the Talk Time testing. However, this is balanced somewhat by the impressive results it attained in the browsing tests. What are your thoughts on the battery life of the Micromax Canvas Xpress 2 as shown in this testing? We always appreciate your comments.