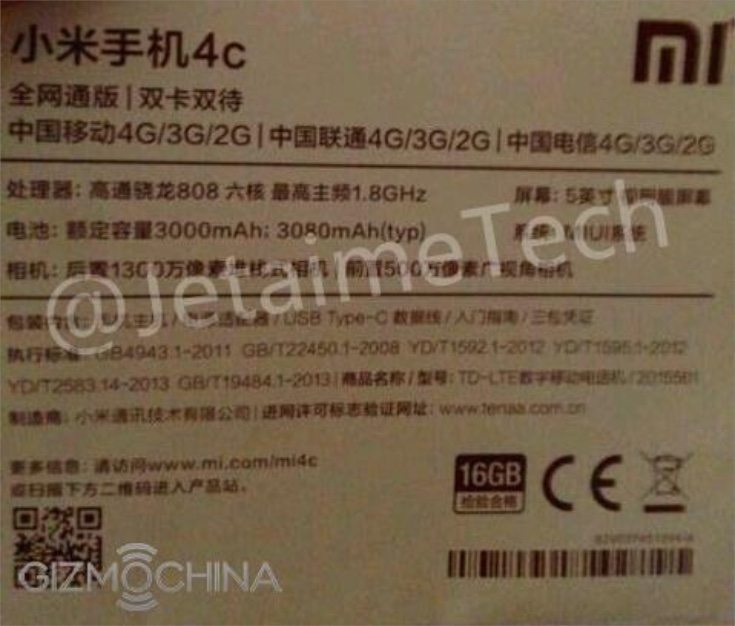 In our previous report on the Xiaomi Mi 4c we told how the device had appeared during the TENAA certification process and had also appeared in a benchmark spot. Now the new leak shows the reverse of the box that will contain the Xiaomi Mi 4c, and this backs up many of the specs mentioned before.

These include a 1.8GHz Snapdragon 808 processor, a 5-inch display with Full HD resolution of 1920 x 1080, 2GB of RAM, and 16GB of internal storage. A 32GB version is also said to be in the pipeline. There’s a 13-megapixel rear camera, and 5-megapixel front-facing camera, plus USB Type C port, and 4G LTE connectivity. Previously we hadn’t heard a battery size but the packaging shows it to be a 3080 mAh battery.

The phone is likely to launch running Android 5.1.1 Lollipop with Xiaomi’s latest MIUI 7. Neither a release date or price has been given for the Xiaomi Mi 4c at this stage, but it’s thought that it will be in the region of CNY 1,299. That’s equivalent to around $200, Â£130, â‚¬180 or Rs. 13,500. Remember this is unconfirmed pricing and prices are also likely to vary by region so only take this information as a guideline.