HTC One A9 in prospective benchmark spot 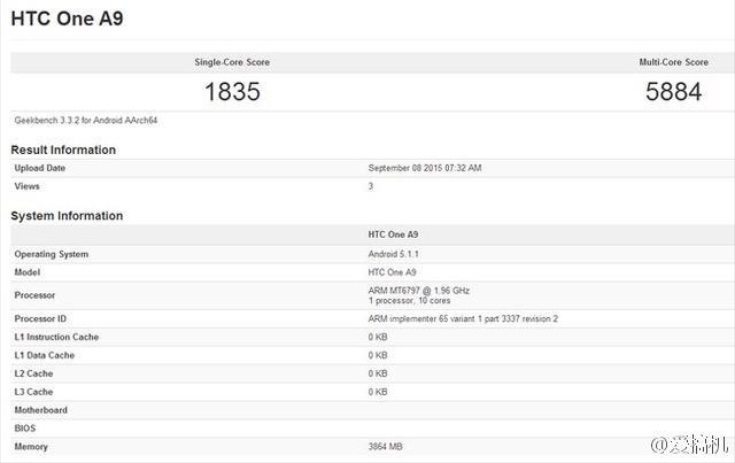 We first heard about a smartphone dubbed the HTC Aero many months ago. It then received a name change to HTC A9, and more recently HTC One A9 has been tipped as the final title on release. Information has been trickling in via the usual leaks and rumors about this phone, and now the HTC One A9 is the subject of a prospective benchmark spot.

So far we’ve heard several leaked specs for the One A9 including a MediaTek Helio X20 deca-core processor. Further unconfirmed specifications included 4GB of RAM, a Quad HD resolution display (2560 x 1440), and RAW camera support. Now a screenshot has hit the web that purports to show HTC One A9 benchmark results.

The benchmarking was conducted on September 8 and the device is shown as running Android 5.1.1 Lollipop. Unfortunately, the benchmark listing doesn’t give us much more information other than the single-core (1835) and multi-core (5884) scores. While news of the HTC One A9 benchmarking is interesting, we have no way of verifying the authenticity of this leak at this stage so you’ll want to bear that in mind.

The HTC One A9 is thought to have a metallic build but there’s still no news on when it will release. It was initially suggested that it would hit the shelves in November. However, since then MediaTek has said that devices powered by the Helio x20 will not arrive until early 2016 so it looks as though we could be waiting several more months yet.

Have you been following news of the HTC One A9, aka Aero /HTC A9? Are you excited to see what HTC will finally bring to the table with this new smartphone? Let us know with your comments.