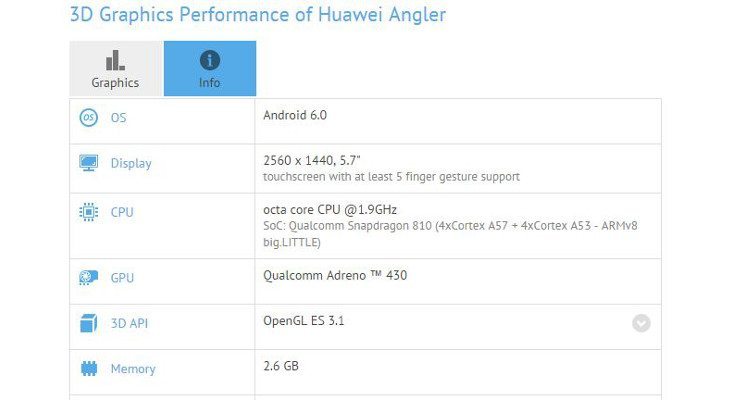 Earlier today, we told you about a fresh Huawei Nexus specs leak and now the device has made another appearance. GFXBench has given us new details on what resides under the hood of the upcoming Huawei Nexus while confirming a few things folks have been wondering about.

The Geekbench listing was great as it allowed us to see a few scores, but it didn’t answer some of the questions lingering from previous Huawei Nexus leaks and rumors. One of them involved the display size, and the GFXBench listing has revealed it will feature a 5.7-inch display with a resolution of 2,560 x 1,440. It’s about what we expected, and puts the device squarely in the phablet or Note range.

Another thing that’s been speculated about is the RAM as some sources say it will have 4GB, while others are going with 3GB. The new Huawei Nexus specs show us it will indeed have 3GB of RAM to go along with a Snapdragon 810 and 32GB of internal storage. In terms of the cameras, there is a 13MP snapper on the backside and an 8MP sensor on the front. A full array of connectivity options are listed as well including NFC, a pedometer, barometer, and Bluetooth. As it’s a Nexus, you’ll get Android 6.0 out of the box.

The new Huawei Nexus specs line up with most of what we’ve already learned, and show a handset that’s an incremental upgrade over last year’s version. How you feel about that depends on what you expected from this year’s model, but we believe most folks should be pleased with what Google and Huawei have put together for 2015.

Are you planning on picking up the Huawei Nexus this year?