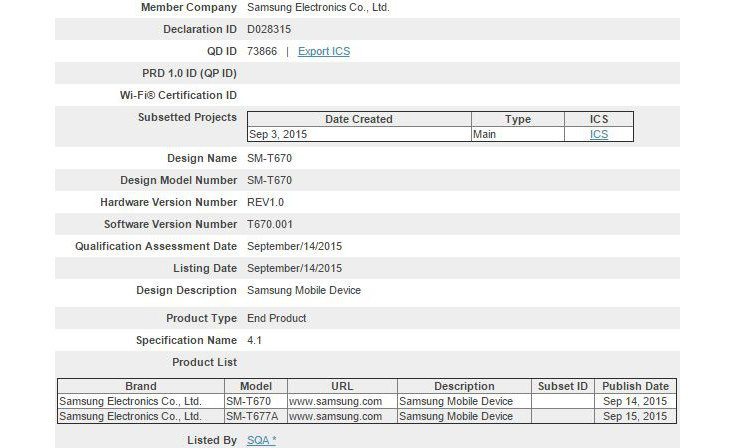 Remember that ginormous tablet from Samsung we told you about? Well, it looks like the Samsung Galaxy View release date may be approaching as the slate has just cleared one regulatory hurdle on its way to a release.

Last week, we learned of a huge new tablet that’s expected to debut with the moniker, Samsung Galaxy View. A few of the specifications have been leaked, but the Samsung Galaxy View release date was up in the air along with several other details. When a device is gearing up towards a release in the states, it has to clear Bluetooth SIG and the FCC, and Sammy’s new slate has just jumped over one of those hurdles.

The Samsung Galaxy View has rolled through Bluetooth SIG, and while the listing tells us nothing new, it lets us know a release should be close. The size of the slate makes it a prime candidate to arrive under Christmas trees… as an 18.4-inch tablet sure won’t fit in a stocking. Size aside, the model number is listed as Samsung SM-T670, which lines up with the previous leaks and pegs it as the Galaxy View.

It remains to be seen how folks will take to such a large slate or how Samsung will market the Galaxy View. Pricing will be important and interesting as well considering the massive screen and mediocre specifications. Rest assured, we’ll keep you in the loop as more details come to light in regards to the Samsung Galaxy View release.

Would you be interested in the Samsung Galaxy View if the price was right?