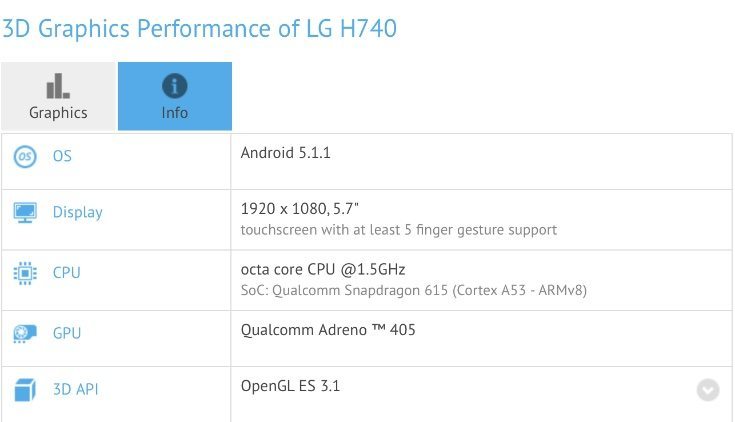 Just yesterday we reported that LG would be holding an event on October 1st in New York. It’s anticipated that a new flagship could be unveiled and it’s possible that other devices may also be shown off. One of them could be the LG H740, a so far unnamed phablet that has shown up in a benchmark spot with some specs.

An LG device with model number H740 has appeared in a GFXBenchmark database, and from the specs this reveals we can see that it’s a mid-range phablet. The benchmarking gives LG H740 specs as a 1.5GHz Snapdragon 615 octa-core processor, Adreno 405 graphics, and a 5.7-inch display with Full HD resolution of 1920 x 1080. It has 2GB of RAM and 8GB of internal storage.

Further specs of the H740 include a 12 or 13-megapixel rear camera with LED flash and 1080p video capture, and a 5-megapixel front-facing shooter with 1080p video capture. There’s also an accelerometer, pedometer, and compass, as well as WiFi, Bluetooth, NFC, and GPS. In the benchmark appearance the device was running the Android 5.1.1 Lollipop operating system.

From the specs we’re not sure the LG H740 is anything to get too excited about, and many people are likely to be more interested in the aforementioned flagship reveal. Hopefully we’ll also hear something official on this new mid-range device and of course we’ll keep you informed if that happens.

If you’re in the market for a new mid-sector phablet, does the LG H740 sound like a possible prospect for you? Let us know by sending in your comments.