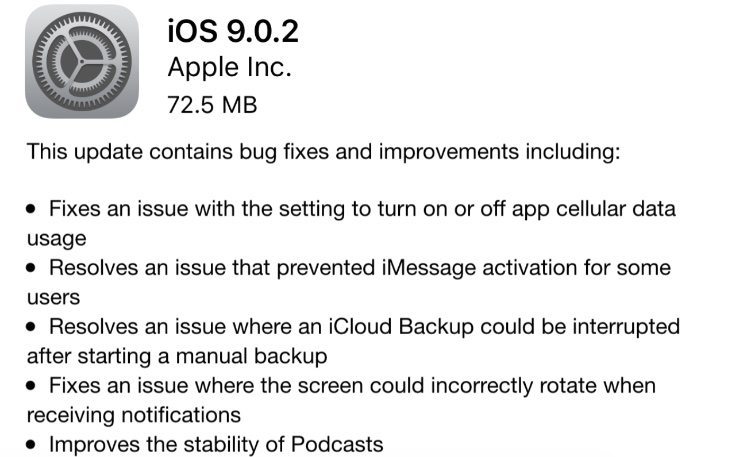 After the public release of Apple’s iOS 9 on September 16th, many of us were a little surprised when iOS 9.0.1 was pushed out just over a week later. Now Apple has surprised us again with an iOS 9.0.2 update already, only a week later after 9.0.1. As you would expect this is only an incremental update, but nevertheless it does bring more fixes.

Fixes that were included in the last iOS 9.0.1 update involved the setup assistant, alarms and timers, video in Safari and Photos, and cellular data loss for those with a custom APN setup via a profile. The new iOS 9.0.2 rollout has further fixes and is around 72MB in size (differs by device), notably larger than the iOS 9.0.1 update.

Bug fixes and improvements with the iOS 9.0.2 update concern iCloud Backup, screen rotation, iMessage and more. Top of the list is a fix regarding the setting for turning app mobile data usage off and on. An issue that stopped some users from being able to activate iMessage has also been resolved. Some device users had also encountered a problem with manual backup where iCloud Backup was being interrupted, and that has also received a fix.

The changelog also lists a fix that for an issue that affected screen rotation on receiving notifications, and the stability of Podcasts has also been improved. Users should be receiving notification of the OTA (over-the-air update) to their devices or it’s worth checking manually under Settings followed by General followed by Software Update. Although this is not a major update we’d still recommend devices being connected to WiFi and having at least 50% charge before beginning the download and installation.

Apple has also ceased signing iOS 8.4.1 and iOS 9.0 as reported by 9to5Mac. This means you will no longer be able to revert to those versions from a more recent version. That might be a pain if you wanted to roll back to iOS 8.4.1 because of iOS 9 problems, although it looks as though Apple is taking quick steps to rectify iOS 9 issues so far.

Have you already installed the new iOS 9.0.2 update? If so, has it fixed any difficulties you were having with your iPhone, iPod touch or iPad? Let us know with your comments.