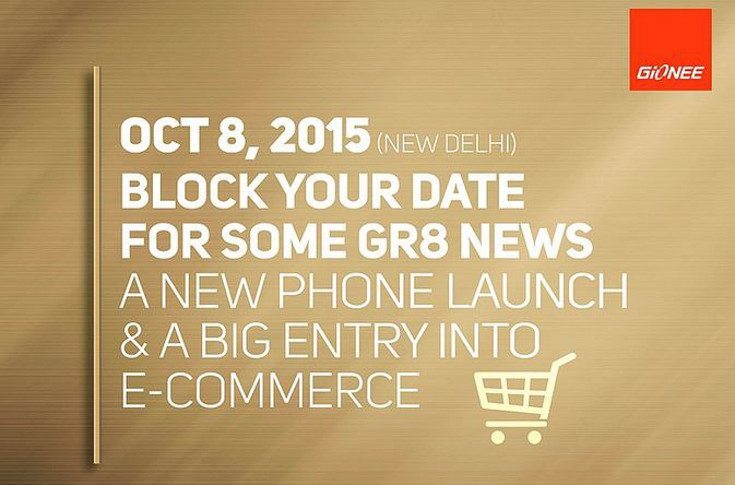 Several smartphones are set to roll out this month in India, and you can now add the Gionee Elife E8 release to that list. The company has teased the announcement for the region while also announcing they’re getting into the E-Commerce game in a big way.

The Gionee Elife E8 has been making the rounds for ages, and now the device is gearing up for a release in India. The company recently rolled out invitations to an event taking place in New Delhi on October 8th. While it doesn’t specifically say Elife E8 on the invite, the phrasing “GR8 News” seems to point towards the Gionee Elife E8 launch in India.

If you’re unfamiliar with the Gionee Elife E8, here’s what you can expect. If the specs stay the same from the company’s China-based model, you’ll get a 6-inch display with a resolution of 2,560 x 1,440 and a speedy octa-core MediaTek Helio X10 under the hood. That chip will be backed by 3GB of RAM, and you’ll have plenty of storage space to fall back on with 64GB.

On the backside of the Gionee Elife E8, you’ll find a fingerprint scanner along with a large 24MP sensor while the front-facing snapper clocks in at a respectable 8MP. As for the battery, we’re not sure how long it will hold up under that massive QHD panel, but there is a 3,500mAh juice box on board. The Dual-SIM Gionee Elife E8 supports LTE and should run Android 5.1 out of the box.

The Gionee Elife E8 price for India hasn’t been leaked or teased, so we have no idea how much you’ll have to shell out to purchase the high-powered handset at this time. We’re also unsure of where you can buy one, but the invite hints at online sales through an E-Commerce portal so we could be looking at a Snapdeal or Flipkart partnership unless Gionne has something else up their sleeves.

Are you interested in the Gionee Elife E8 now that it’s coming to India?