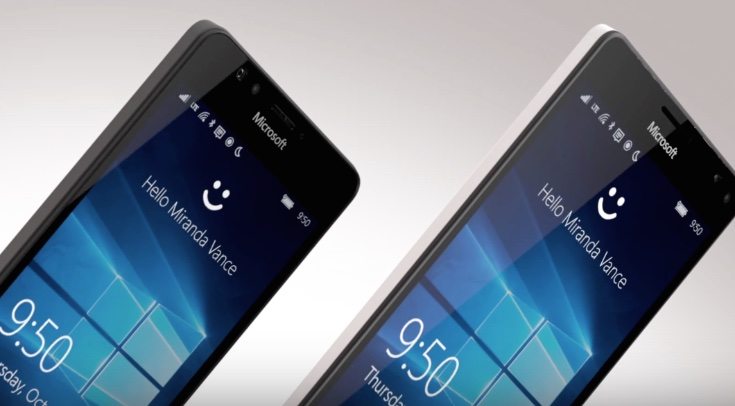 At last, after many months of waiting Microsoft has just announced the Lumia 950 smartphone alongside the Lumia 950 XL. We’re concentrating here on the smaller of the two devices and we have information on Microsoft Lumia 950 specs confirmed and a November release.

To say that this phone and its larger sibling have been hotly anticipated is an understatement. It’s been a long time since we saw a new flagship Lumia phone, and this has the added bonus that it will release running the new Windows 10 Mobile OS. It also has plenty of improvements over the Nokia Lumia 930 that released in 2014.

It has a decently sizeable 3000 mAh battery with wireless charging and USB Type-C port. Users will be able to connect to a display dock. For camera capabilities you’re looking at a 20-megapixel PureView rear camera with Carl Zeiss optics, triple-LED flash as rumored, and optical stabilization (5th gen). It features 4K video capture with Hi-Fi audio recording. At the front there’s a 5-megapixel camera.

The Microsoft Lumia 950 also features liquid cooling, and it has an infra-red iris scanner with Windows Hello feature for unlocking the device. You can see more about the phone in the introductory official video that we’ve positioned below this post. Now we get to the price, and we know that’s what many readers have been waiting to hear confirmed. It’s not cheap but thankfully the price is less than some of the leaked price indicators, as the Microsoft Lumia 950 will have a price tag of $550.

The phone will release in November, although no specific date has been announced yet. We’ll keep you informed, but on first sighting things are looking promising for this new Lumia flagship. What do you think of the Microsoft Lumia 950 specs now that they are official? Have you already decided you want the Microsoft Lumia 950?