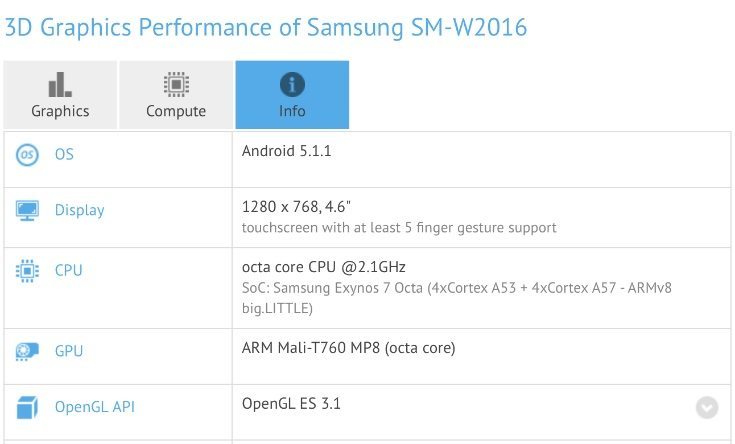 A Samsung device SM-W2016 has surfaced in benchmarking that looks to be the Samsung Galaxy Golden 3 considering the model number. The GFXBenchmark listing gives some specs of the smartphone that include a 2.1GHz Exynos octa-core processor, Mali-T760 MP8 graphics, and a 4.6-inch display with HD resolution.

More specs of the device are 3GB of RAM, 64GB of internal storage, a 16-megapixel rear camera, and 5-megapixel front-facing snapper, although there’s no mention of the battery size yet. At present the phone is running the Android 5.1.1 Lollipop operating system with Samsung’s UI. Other touted specs include single SIM support and 4G LTE connectivity.

If indeed this turns out to be the Samsung Galaxy Golden 3 we should point out that the Galaxy Golden 2 was available in a very limited amount of markets including China. Of course that could be the same for this new Galaxy Golden, although it’s possible it will see a more widespread release this time around.

Are you partial to clamshell smartphones? When the Samsung Galaxy Golden 3 releases, would you consider it as your next device purchase? Let us know with your comments.