Samsung Galaxy On5 and On7 made official for some 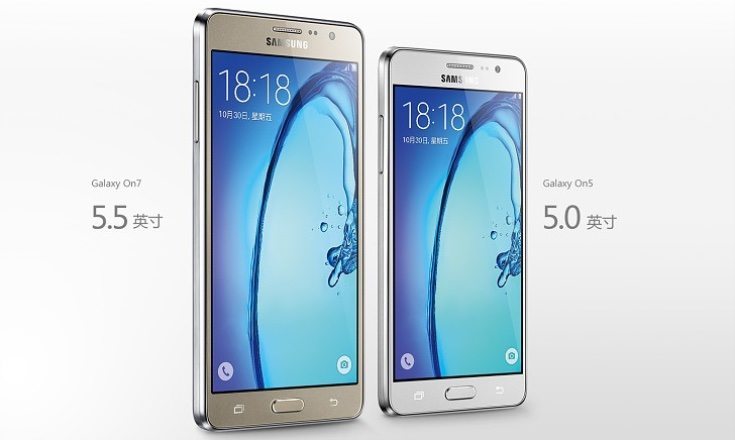 The Samsung Galaxy On5 and Galaxy On7 have finally been made official for some. If you think you haven’t heard the many rumors about these smartphones before, that’s probably because for some time they have been known as the Samsung Galaxy Grand On and Galaxy Mega On respectively. The phones will soon release in China and are likely to be heading to more regions.

There have been growing rumors about the Samsung Galaxy Grand On (or O5) and Galaxy Grand Mega On (or O7) for a while now. We’ve reported on leaked specs and images, and then just a few days ago they appeared again, but retitled as the Samsung Galaxy On5 and On7. That was from a sighting of the On5 on the official Samsung India store. Although the online page was later pulled, we can at least assume that the phones will also launch for India as well as other markets.

Now Samsung China has officially unveiled both of the new smartphones. As expected from the leaked specifications, these are entry-level handsets but look quite stylishly designed. They have a plastic build with faux-leather backs and slim frames and bezels. Both the Samsung Galaxy On5 and Galaxy On7 are expected to go on sale in China very soon, so it shouldn’t be too long until we hear about further availability.

The phones are now listed at Samsung China online so all of the leaked specs so far can be put to rest. Official specs of the Samsung Galaxy On5 include a 1.3GHz Exynos quad-core processor, Mali-T720 graphics, and a 5-inch display with HD resolution of 1280 x 720. It has 1.5GB of RAM, 8GB of internal storage (expandable via microSD), LTE connectivity, and a 2600 mAh battery. It has an 8-megapixel rear camera and 5-megapixel front-facing camera, and runs the Android 5.1 Lollipop operating system.

Turning our attention to the Samsung Galaxy On7 this one has a 1.2GHz quad-core processor and a 5.5-inch display with HD resolution. It has 1.5GB of RAM, 8GB of internal storage, LTE support, and a larger 3000 mAh battery. There’s also a 13-megapixel rear camera, 5-megapixel front-facing snapper, and it runs Android 5.1 Lollipop. The confirmed specs of both handsets match up with the earlier leaks.