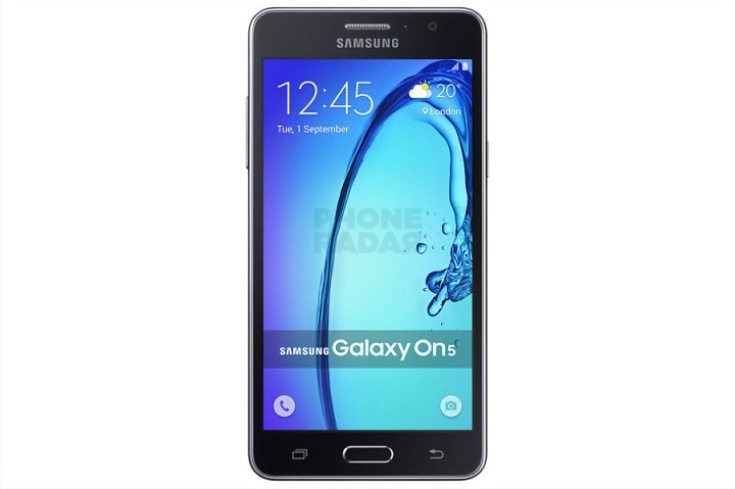 The official images of the Samsung Galaxy On5 appeared on the Samsung India online store. Although the page has since been pulled, it was too late to stop the cat getting out of the proverbial bag. The Samsung Galaxy Grand On, which we should probably now call the Galaxy On5, offers nothing too surprising in appearance and looks just as you’d expect for one of the company’s affordable smartphones.

The listing seemed to point to the phone being targeted at the younger sector of the market, with better selfies being highlighted as a main feature. Specs also tally largely with those previously rumored. They include an Exynos 3475 processor, 5-inch Super AMOLED display with HD resolution of 1280 x 720, 1.5GB of RAM, and 8GB of internal storage (expandable). It has an 8-megapixel rear camera, 5-megapixel front-facing camera, and a 2600 mAh battery, and runs the Android 5.1.1 Lollipop OS.

Many of the specs of the Samsung Galaxy On7 (Mega On) are thought to be similar, but with a larger 5.5-inch display, 3000 mAh battery, and 13-megapixel rear camera. As far as prices are concerned it’s tipped that the Galaxy On5 will be priced at approximately Rs. 10,000 with the larger Galaxy On7 around Rs. 13,000.

The growing amount of leaks on these new Samsung smartphones suggests an official launch is not too much further away. From what you’ve heard so far are you a prospective buyer of the Samsung Galaxy On5 (Samsung Galaxy Grand On) or Galaxy On7 (Galaxy Mega On)?