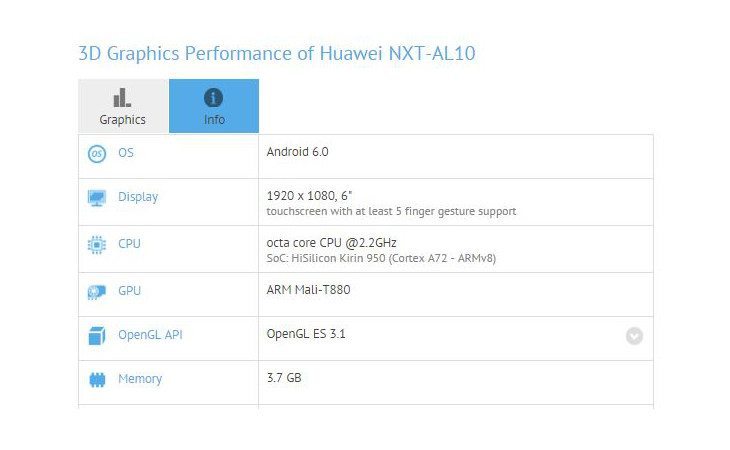 The Huawei Mate 8 has reared its head several times over the past few days, and it has just struck again. A new benchmark listing has emerged, and now we’re getting a clearer look at the Huawei Mate 8 specs.

We’ve seen teasers and rough renders of the Huawei Mate 8, and today we even learned when it would be shown off. The Huawei Mate 8 specs have seemingly been confirmed as well thanks to a new benchmark listing on GFXBench. It’s essentially the same device that has been making its way through the rumor mill, and that’s not a bad thing if you dig lots of horsepower.

According to the GFXBench listing, the Huawei Mate 8 will feature a 6-inch panel with a resolution of 1,920 x 1,080. While the lack of QHD may be a disappointment to some, everyone should be pleased with the octa-core Kirin 950 powering the device and the whopping 4GB of RAM. You’ll also have plenty of storage with 64GB, and the camera combo clocks in at 16MP/8MP.

If the Huawei Mate 8 specs in the new benchmark listing tickle your fancy, you’ll be pleased to know the smartphone is set to debut soon. Today’s tease gave us a date of November 26th, but you can bet the farm we’ll hear more about the device before primetime.

Are you intrigued by what we know of the Huawei Mate 8 thus far?