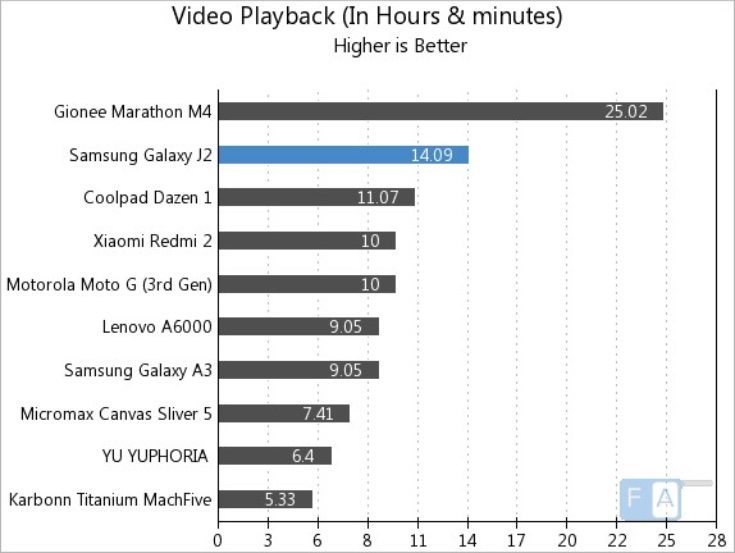 If you want to check out full specs and pricing for this smartphone you might like to take a look at our recent Galaxy J2 vs. Samsung Z3 comparison. The J2 is equipped with a 2000 mAh battery and it should be interesting to see some results of battery life testing. Fone Arena has comprehensively tested the Samsung Galaxy J2 battery life to find this out.

The testing was split into four categories and they were Talk Time, 3G Browsing, WiFi Browsing, and Video Playback. The results achieved by the Galaxy J2 were then depicted on tables compared with some other handsets. Just a few of the other phones included in the tables were the Lenovo A6000, Xiaomi Redmi 2, Samsung Galaxy A3, and YU Yuphoria.

For Talk Time the Samsung Galaxy J2 achieved a time of 25 hours and 2 minutes as shown in the image directly above. That put it in an equal position alongside the Xiaomi Redmi 2, Lenovo A6000 and Coolpad Dazen 1. The Karbonn Titanium MachFive and Gionee Marathon M4 both managed a time of 33 hours and 19 minutes to beat all of these. The YU Yuphoria on the other hand was in the bottom spot on 8 hours and 20 minutes. 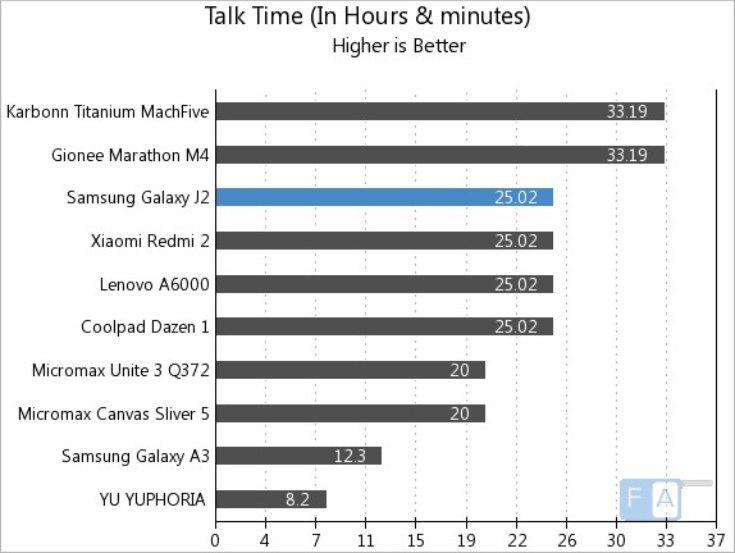 The next test involved 3G Browsing. This time the Samsung Galaxy J2 was in the middle of the table with a time of 4 hours and 46 minutes, the same as for the Galaxy A3. The Gionee Marathon M4 was in top spot again with a time of 10 hours while the YU Yuphoria was in last place once more, on just 3 hours and 2 minutes.

WiFi Browsing came next and the Samsung Galaxy J2 achieved second position with a time of 8 hours and 20 minutes. It was followed by the Lenovo A6000 on 7 hours and 8 minutes, and top spot once again was the Gionee Marathon M4 on 14 hours and 9 minutes. The YU Yuphoria was in… you guessed it… last place again, but this time it was joined by the Karbonn Titanium MachFive. They both managed 4 hours and 32 minutes.

Finally we get to Video Playback where once again the victor was the Gionee Marathon M4 with a whopping time of 25 hours and 2 minutes (see image below). The Samsung Galaxy J2 managed second position on 14 hours and 9 minutes. On this occasion the Karbonn Titanium MachFive was in last place all on its own with a time of 5 hours and 33 minutes.

The Samsung Galaxy J2 battery life results are pretty good for an entry-level smartphone in this price sector. To be fair we’ll also point out that the Gionee Marathon M4 has a whopping 5000 mAh battery as well as a higher price. If you want to see the full tables, a One Charge Rating, and how to find out about the testing procedures used, you can see this at the source below.

Are you satisfied by the Samsung Galaxy J2 battery life as shown in this testing? Why not let us know by sending us your comments.