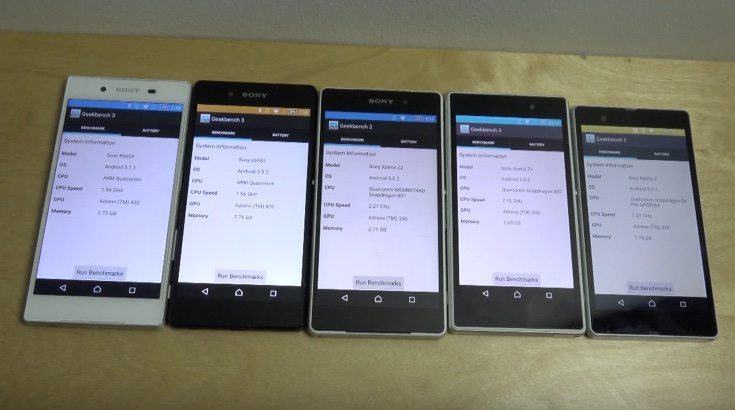 The Sony Xperia Z5 is the most recent of Sony’s Xperia flagships and was announced alongside the Xperia Z5 Compact and Xperia Z5 Premium. It has top-flight specs that include a Snapdragon 810 octa-core processor, so it might be interesting to see a benchmark showing how it compares in this respect to some older Xperia smartphones. Meet the Sony Xperia Z5 vs Z3 Plus, Z2, Z1, Z in a benchmark speed test.

If you’re wondering why the Xperia Z4 isn’t in the lineup we’ll remind you that the phone released in Japan but was rebranded as the Sony Xperia Z3 Plus (or Z3+) for other regions. In fact while the Xperia Z5 is the most recent flagship, the Xperia Z3 Plus only released in June this year so is still very current. It also sports the same Snapdragon 810 octa-core CPU as the later Z5. By comparison the Xperia Z2, Z1 and Z released in April 2014, September 2013, and February 2013 respectively.

Below this post we’ve embedded a video from Adrianisen, a YouTuber whose videos we’ve shared before. They often offer something a little quirky, as in this benchmark speed test of the Sony Xperia Z5 vs Z3 Plus and older Xperia Z devices. It’s interesting to see all of the handsets lined up alongside each other to see how the designs have changed (or not) since the first one.

The Xperia Z, Z1, Z2, and Z3 Plus are all running Android 5.0.2 Lollipop while the Xperia Z5 is running Android 5.1.1 and there’s a quick chance to see the various processors, graphics, and RAM details of the phones displayed. You’ll then see the Geekbench 3 benchmark test being run on all of the handsets before the final single-core and multi-core scores are displayed.

We’re not going to ruin the suspense by telling you the results before you watch the video. However, look out for a point of interest with the Xperia Z3 Plus and Z5 seeing as they pack the same processor. It’s also interesting to see the vast difference in scores between the oldest and newest in the lineup. You might also like to check out some recent speed tests between the Xperia Z5 vs iPhone 6S.

After you’ve taken a look at the video we’d welcome your comments about the outcome of this benchmark test on the Sony Xperia Z5 vs Z3 Plus, and others. Drop us your thoughts in the comments box provided below.