Update to Android 6.0.1 Marshmallow starts for some 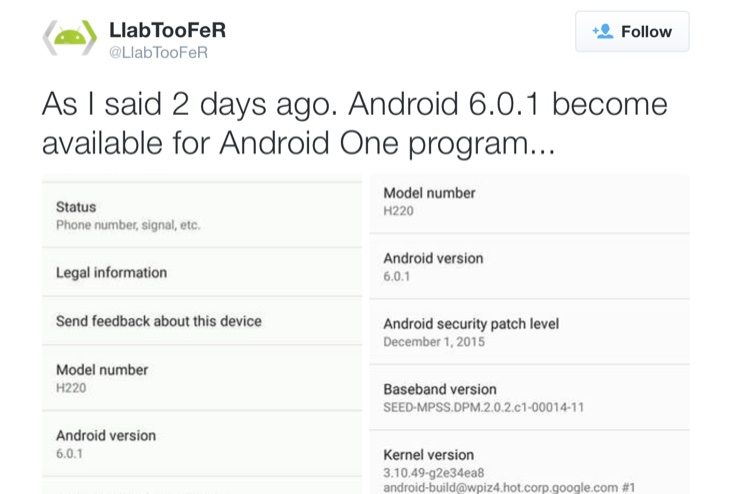 Many people are currently waiting for the Android 6.0 Marshmallow update to hit their smartphones and tablets. However, we can tell you that in fact the update to Android 6.0.1 Marshmallow has already started for some. The fact that it’s rolling out first to smartphones in the low-end Android One program may surprised some device owners.

Plenty of readers will know that Google Nexus devices are always among the first in line for new Android updates. However, not so many will know of the Android One project, aimed at producing very affordable smartphones for emerging markets such as India, the Philippines, Bangladesh, Sri Lanka, Pakistan, and more. Part of the deal with these budget phones was speedy future Android updates, and that’s certainly being fulfilled.

Big name manufacturers such as Samsung, Sony, and HTC are working on the update to 6.0 Marshmallow, with some makers being more transparent than others about timeframes for the rollout. However, Android One smartphones started to receive 6.0 Marshmallow back in October, soon after it released. A few handsets in the Android One program include the Micromax Canvas A1, Spice Dream Uno Mi-498, Karbonn Sparkle V, QMobile A1, and Lava Pixel V1.

Now it’s reported that the rollout of the Android 6.0.1 update has begun, and it’s has started appearing for Android One phones first. However, at this early stage it only appears to be reaching a limited amount of users, as so far it has been spotted for the Cherry Mobile G1 in the Philippines.

Obviously Android 6.0.1 is an incremental upgrade and so far it appears that the update offers stability improvements and certain bug fixes. A tweeted image from often-reliable leaker @LlabTooFeR also indicates the inclusion of Google’s December security patch.

We’d really like to track the progress of the Android 6.0.1 update for Android One phones to see how far-reaching it is. If you have any Android One phone in any region where they are sold we’d like to hear from you. Have you received the Android 6.0.1 Marshmallow update for your device yet? If so, which phone do you have and which region are you in?