Samsung Galaxy A9 release date indicator for next week 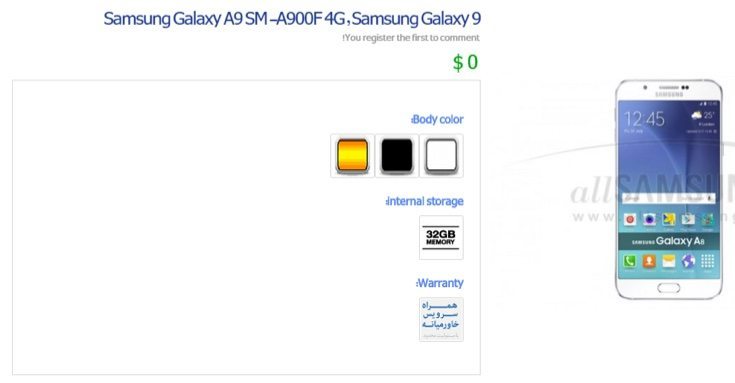 There have been growing signs of the Samsung Galaxy A9 heading to a launch very soon, and now there’s a release date indicator for next week. The news comes from an official Samsung website, so we’re inclined to believe it’s accurate. The same source also gives us further confirmation of the specs of the phone.

Earlier this month we reported that the Samsung Galaxy A9 had passed Bluetooth certification, a sure indicator that an official unveiling is getting closer. Just a few days ago we told of a further leak, as a benchmark appearance of the phone revealed some specifications.

Now the Galaxy A9 with model number SM-A900F has shown up on Samsung’s Iran website, so this is really as official as it gets. Specs tally with those leaked previously, with the latest spot including a Snapdragon 620 octa-core processor (four cores at 1.8GHz and four at 1.4GHz), Adreno 510 graphics, and a 5.5-inch Super AMOLED display with Full HD resolution of 1920 x 1080 resulting in 401 ppi.

Further Samsung Galaxy A9 specs are given as 3GB of RAM and 32GB of internal storage, expandable via microSD to 128GB. There’s a 16-megapixel rear camera, a 5-megapixel front-facing snapper, and connectivity options include Bluetooth 4.0 LE, NFC, and GPS. The phone is running the Android 5.1.1 Lollipop OS, but just as with the earlier leak there’s no mention of battery size. Color choices are shown as black, gold, or white.

The most interesting part of this latest appearance is that the Samsung website concerned shows a launch date of December 1. Pease note that the screenshot below shows only a placeholder for the Galaxy A9 and actually depicts the Galaxy A8. As this latest information comes from an official Samsung site we’re inclined to think it’s credible, so it won’t be too much longer before the phone is finally made official.

Of course it’s possible that the December 1 launch date might not apply for all markets, but we should be hearing much more on this very soon. We’ll bring further news as it comes to us but in the meantime we’d like to hear your comments. Are you a potential buyer for the metal-clad Samsung Galaxy A9?