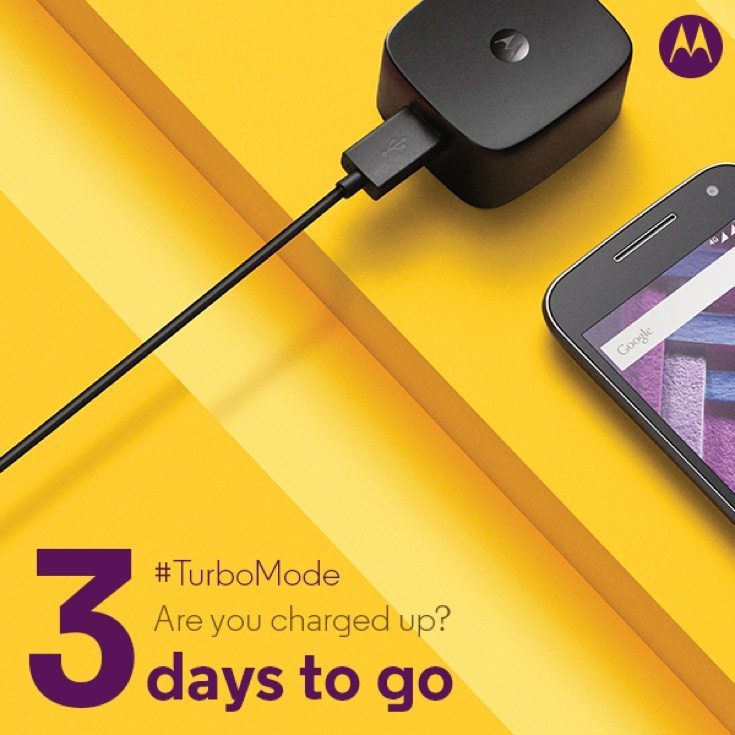 In early November we reported on the Motorola Moto G Turbo Edition that was set to release in Mexico. This smartphone has some improvements over the Moto G 3rd gen but it was not clear if it would release for other markets. If you’ve been waiting to find out more you might be pleased to hear that the Moto G Turbo is now being teased for an India launch this week.

It looks as though the Moto G Turbo Edition will be officially launched for India in the middle of the week following a posting on the company’s India Twitter account. Today Motorola India tweeted, “Power up and get ready for #TurboMode! 3 Days to go for Moto G Turbo edition. Coming soon!”

That’s pretty plain, so if you’ve been hoping that the phone will go on sale in India your wishes will be answered. That’s not the first hint either, as Motorola has been posting other teasers over the weekend. We’re not entirely sure which is the big day though. While today’s tweet indicates Thursday, a previous tweet from the weekend also spoke of a 3-day wait so it could arrive as early as Tuesday or Wednesday.

Power up and get ready for #TurboMode! 3 Days to go for Moto G Turbo edition. Coming soon! pic.twitter.com/iDZGnatsAZ

The Moto G Turbo Edition has a 5-inch IPS LCD display, 2GB of RAM, and 16GB of internal storage (expandable via microSD). Other specifications include a 13-megapixel rear camera and a 5-megapixel front-facing camera, and it runs the Android 5.1.1 Lollipop OS that should be upgraded to Android 6.0 Marshmallow at some point. While it has the same 2470 mAh battery size as the Moto G 3rd gen, the Moto G Turbo Edition has another benefit in that it supports Turbo Power quick charging.

It’s worth pointing out that the Moto G Turbo Edition also sports IP67 certification for water-resistance, to a depth of 1 meter for up to 30 minutes. The Moto G Turbo price for India should be announced at the launch this week. As an indicator we can tell you that the phone launched in Mexico priced at 4,699 pesos, around $280. That’s equivalent to around Rs. 18,600, but please note that’s just an indicator as pricing can vary from one region to another.

Are you pleased to hear that the Moto G Turbo Edition is about to launch in India? What sort of price are you prepared to pay for this Moto G variant?