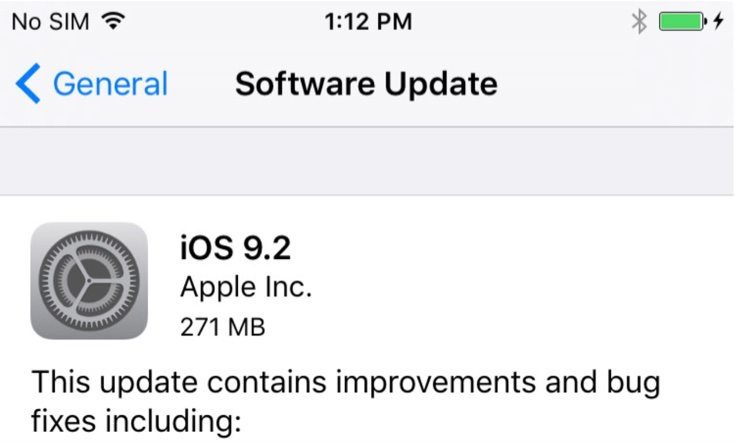 Apple has now released the iOS 9.2 update for iPhone, iPod touch, and iPad after several rounds of beta testing. The update includes numerous improvements and fixes and we have some of the details as well as as full changelog availability.

iOS 9.2 has been available for developers and public beta testers since October, from around the same time that iOS 9.1 was released to the public. A few of the inclusions with iOS 8.2 are Apple Music improvements to making playlists, browsing classical music and saving songs offline, and there’s also an improvement for sending large attachments in Mail.

If you enjoy Apple News you’ll find a fresh Top Stories section to keep informed throughout the day about the big stories. Safari picks up an enhanced Safari View Controller, and the iOS 9.2 update also brings Arabic language support and Siri for this language for the first time.

Further additions with the iOS 9.2 update includes added Lightning to SD Card Reader support, and this enables photographers to capture videos and photos from dedicated cameras and import them to iPhones. There’s also an improved iBooks with 3D Touch now supported.

The update also has plenty of security content for iPhone 4S and later, iPod touch 5th gen and later, and iPad 2 and later, and you can read more about that at this Apple page. If you want to check out the entire changelog for this update for all of the improvements and fixes included head to this iClarified post.

Have you already downloaded and installed the iOS 9.2 update on your iPhone, iPod touch, or iPad? If so, has everything gone smoothly for you or have you noticed any issues? What are your thoughts on the improvements and changes that this latest iOS update brings? Let us know with your comments.