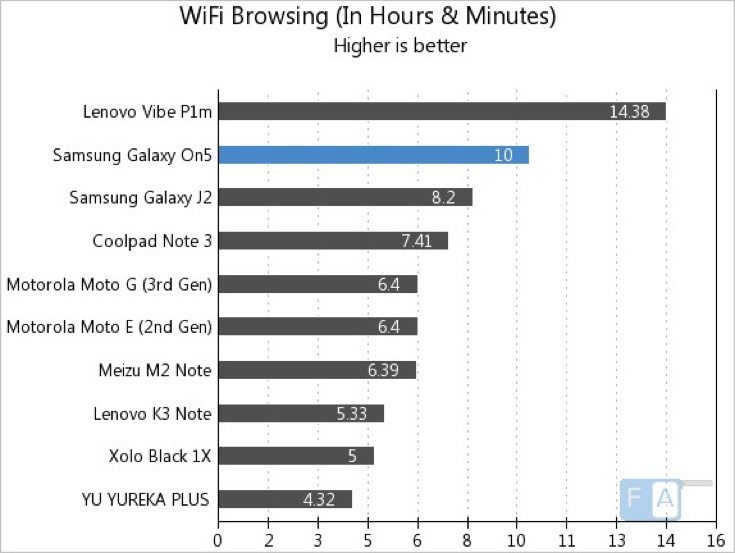 The Samsung Galaxy On5 released last month and is one of the company’s more affordable smartphones. Whether you pay a lot for a new device or whether it has a budget price tag, you still want it to offer a decent battery performance. With this in mind we’re looking at Samsung Galaxy On5 battery life testing and the results compared with several other handsets on the market.

The Galaxy On5 was officially introduced alongside the Galaxy On7, and you can see specs and more in our launch article on the phones. We’re focusing on battery life today, and in this respect the Samsung Galaxy On5 carries a 2600 mAh battery. That juices a 1.3GHz quad-core processor and a 5-inch HD resolution display.

Comprehensive battery life testing takes a good amount of time, and Fone Arena is a great source of this type of information. The site has conducted its usual range of battery tests on the Samsung Galaxy On5 and this is split into four key categories, Talk Time, 3G Browsing, WiFi Browsing, and Video Playback.

The resulting times achieved by the phone were then placed on tables along with the results of numerous other smartphones, so that you can see how the Samsung Galaxy On5 battery life performance compares. Just some of the other handsets included on the tables were the Moto G 3rd gen, Samsung Galaxy J2, Lenovo K3 Note, Coolpad Note 3, and Yu Yureka Plus.

In Talk Time the Galaxy On5 attained a time of 25 hours and 2 minutes, the same time as managed by the Moto G 3rd gen and the Galaxy J2 (see image directly below). They were only topped by the Moto E 2nd gen and Meizu M2 Note that came in joint first place on 33 hours and 19 minutes. The Xolo Black 1X on the other hand managed only 12 hours and 30 minutes putting it in last position. 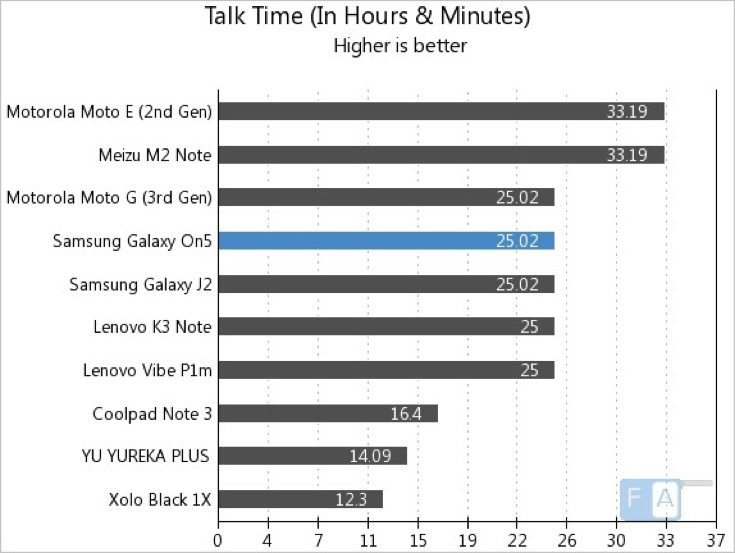 For 3G Browsing the Galaxy On5 managed fourth place with a time of 5 hours and 15 minutes. The Lenovo Vibe P1m was in top spot this time on 6 hours and 10 minutes, with the Coolpad Note 3 second and the Moto E 2nd gen third. This time around it was the Lenovo K3 Note in bottom spot on just 3 hours and 42 minutes.

Moving on to WiFi Browsing, the Galaxy On5 managed an impressive second place with a time of 10 hours exactly. It was topped only by the Lenovo Vibe P1m on 14 hours and 38 minutes, while the Galaxy J3 was third with 8 hours and 20 minutes. Languishing at the bottom of the table (image below story) was the Yu Yureka Plus with a time of 4 hours and 32 minutes, less than half the time attained by the On5.

Finally we get to Video Playback and the Galaxy On5 managed a respectable fourth spot again with a time of 11 hours and 7 minutes. Once more it was the Lenovo Vibe P1m in first place on 16 hours and 5 minutes followed by the Galaxy J2 and Coolpad Note 3 in second and third positions on the table. In the bottom spot this time around was the Moto E 2nd gen on 7 hours and 8 minutes.

Considering its sector in the market the Samsung Galaxy On5 battery life performance certainly seems respectable given the results of this testing. For further tables, a One Charge Rating, and details of the testing procedures, please check out the source below. You might also want to take a look at a benchmark and gaming look for the Galaxy On5.

Are you satisfied by the Samsung Galaxy On5 battery life results from this round of testing? Let us know with your comments.