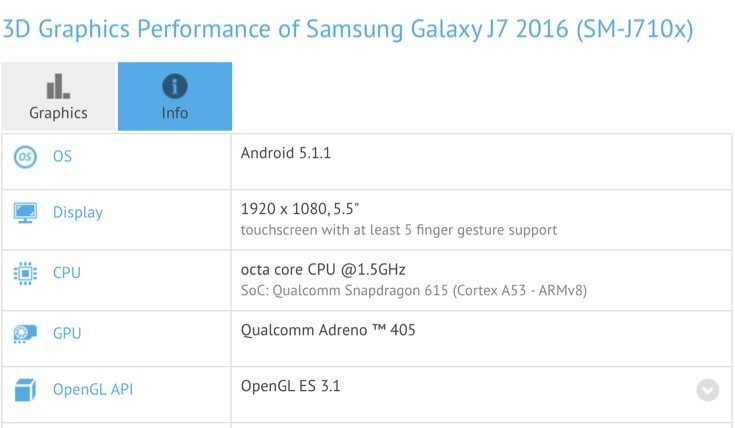 Samsung’s Galaxy J series released last year and the new Galaxy J1 2016 was recently introduced. The Galaxy J5 2nd gen has also leaked, and now it’s the turn of the new J7 that has just shown up in a benchmark spot. This has revealed some Samsung Galaxy J7 2nd gen specs and a few changes from the current version.

There have been growing indicators of Galaxy J 2016 smartphones recently, although the quiet launch of the Galaxy J1 2nd gen in Dubai last week caught us by surprise. The arrival of the new J1 is expected to follow to further markets very soon. Just yesterday we saw leaked specs for the Galaxy J5 2016 from a benchmark appearance, and now the Samsung Galaxy J7 2nd gen has appeared for benchmarking.

These specs have not been officially confirmed, but if this is accurate the Samsung Galaxy J7 2nd gen has a higher resolution display, and more RAM than the original version. It’s perhaps worth questioning the 3GB of RAM though, as this would be double the amount of RAM than the current J7. The original Galaxy J5 and J7 both had 1.5GB of RAM, and the recent benchmark for the Galaxy J5 2nd gen showed a step up to 2GB of RAM, so 3GB for the J7 2016 looks optimistic. However, it’s always possible so fingers crossed.

The benchmark also shows the Samsung Galaxy J7 2nd gen as running Android 5.1.1 Lollipop rather than Android 6.0 Marshmallow, although many will hope that will have changed when it reaches a release. There’s still no news on when this new J7 will arrive, but considering the Galaxy J1 2nd gen has already launched we expect the next-gen J5 and J7 models soon.

Are you pleased to hear that the Galaxy J7 2016 looks to be just around the corner? What are your thoughts on the leaked Samsung Galaxy J7 2nd gen specs from this benchmark appearance? Let us know with your comments.