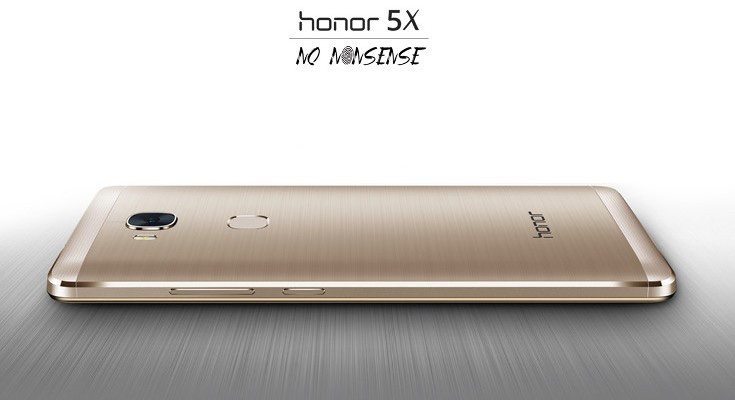 The Honor 5X was officially introduced in China last year, and many people have been waiting for it to launch in India. That day has arrived and Huawei Honor 5X availability has been detailed. Of course we also have news on the specifications and confirmed price for this new smartphone.

This is the successor to the Honor 4X, and the Huawei Honor 5X price has been announced as Rs. 12,999. If you’re keen to get your hands on it you’ll be glad to know that it will be available from February 1st. Pre-orders for the device start today on Amazon.in and Flipkart, and there’s a choice of Sunset Gold or Silver colors.

The phone has a metal unibody build, and specs include a Snapdragon 616 octa-core processor (four cores at 1.5GHz and four at 1.2GHz), with Adreno 405 graphics. The IPS display is 5.5-inches in size with Full HD resolution of 1920 x 1080, and there’s 2GB of RAM, with 16GB of internal storage that can be expanded via microSD to 128GB.

The Huawei Honor 5X is a dual SIM handset that’s juiced by a 3000 mAh battery. Connectivity options include 4G LTE, WiFi 802.11 b/g/n, Bluetooth 4.1, and GPS, and it runs Android 5.1 Lollipop with EMUI 3.1. The camera set-up includes a 13-megapixel main camera on the rear with Sony/Samsung sensor, f/2.0 aperture, LED flash, and 28mm wide-angle 5P lens. At the front there’s a 5-megapixel unit with f/2.4 aperture and 22mm wide-angle lens.

The phone measures 151.3mm x 76.3mm x 8.15mm and it weighs 158g. Features include a fingerprint sensor on the rear that’s capable of unlocking the handset in less than 0.5 seconds, and also Box speakers with Smart PA audio chip. Readers may be interested in the more affordable Huawei Honor Holly 2 Plus that also launched at the event today. It’s a budget 4G LTE smartphone priced at Rs. 8,499.

Will you be picking up the Huawei Honor 5X as soon as it becomes available, or maybe you’re more likely to buy the Honor Holly 2 Plus?