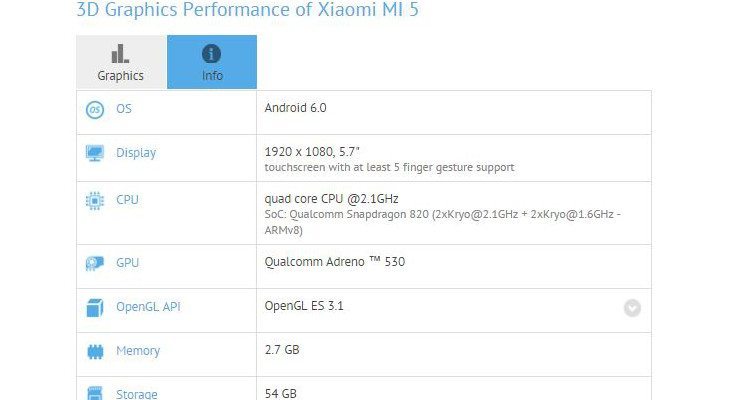 The Xiaomi Mi 5 has leaked more than many handsets in its class, and today we’re getting another one. The handset has rolled through GFXBench, we’re here to give you the scoop on the specifications.

We lost count of how many times the Xiaomi Mi 5 has leaked, as it’s been running rampant through the rumor mill since early last year. It appears as if we are finally nearing the Xiaomi Mi 5 release, and as you would expect, we are getting another dose of specs. This time around it comes from a more reputable source than the previous retail listing although some of the specifications are puzzling.

According to the GFXBench listing, the Xiaomi Mi 5 will come to market with a large 5.7-inch display sporting a resolution of 1,920 x 1,080. That’s larger than many of the previous rumors hinted at, but the power hasn’t changed as it’s shown to have the new Snapdragon 820. The storage capacity is listed at 64GB but there is 3GB of RAM under the hood instead of the 4GB that we expected. Oddly enough, the cameras are missing so Android 6.0 and a variety of sensors round things out for the Xiaomi Mi 5 listing.

We’re going to tell you to take this benchmark listing with a dose of salt as several things just don’t jibe with what we’ve heard up until now. The RAM and display size don’t quite pan out with previous leaks, so we are not quite sure what to make of this one. If the company brings the Xiaomi Mi 5 to Barcelona, we won’t have to wait long to find out what the Xiaomi Mi 5 really has under the hood.