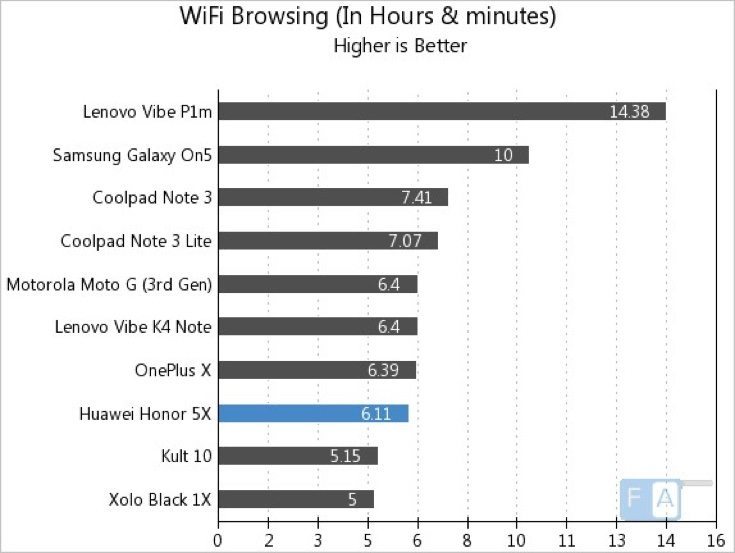 The Huawei Honor 5X is currently generating a lot of interest and it has arrived for sale in various regions. If you’re wondering whether to purchase this smartphone but battery life is an important factor to you, this is something you should think about before you buy. Hence we’re considering the Honor 5X battery life vs Moto G 3rd gen, OnePlus X and more.

Key specs of the Honor 5X include a Snapdragon 615 octa-core processor, a 5.5-inch display with Full HD resolution of 1920 x 1080, and 2 or 3GB of RAM (models vary). It packs a non-removable 3000 mAh battery, and you can see fuller details in our specs comparison of it against the Lenovo K4 Note. By comparison the Moto G 3rd gen has a 2470 mAh battery while the OnePlus X is equipped with a 2525 mAh battery.

It’s always a good idea to check out battery life of a prospective purchase, and Fone Arena has conducted its usual array of battery performance testing on the Huawei Honor 5X. The four categories of testing were Talk Time, 3G Browsing, WiFi Browsing, and Video Playback. The Honor 5X battery life results were then placed on charts comparing the performance with several other popular smartphones. As well as the Moto G 3rd gen and OnePlus X, just some of the others included are the Lenovo Vibe K4 Note, Lenovo Vibe P1m, and Samsung Galaxy On5.

For Talk Time (see image directly below) the Huawei Honor 5X managed a time of 25 hours and 2 minutes, putting it in equal second spot alongside the Moto G 3rd gen and Samsung Galaxy On5. The OnePlus X took top spot on 33 hours and 19 minutes, while out of ten phones the Kult 10 was at the bottom of the table on just 11 hours and 7 minutes. 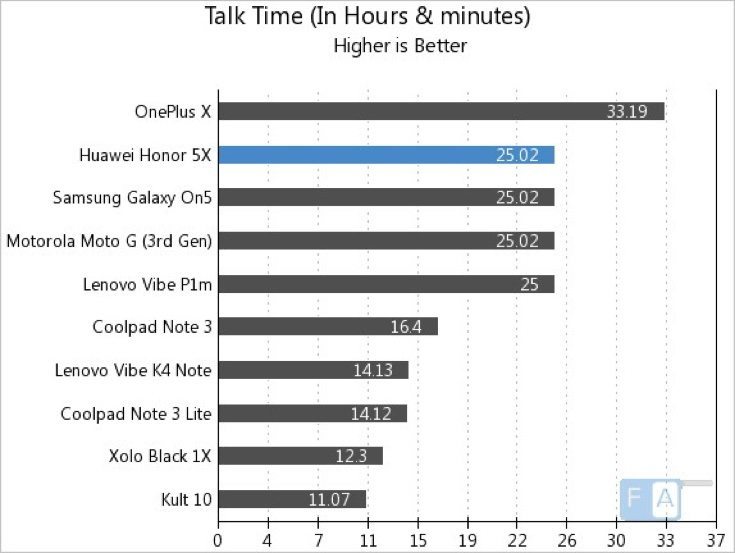 The Honor 5X attained a time of 5 hours and 31 minutes for 3G Browsing, putting it firmly mid-table. The OnePlus X was above it in third place with 5 hours and 33 minutes while the Moto G 3rd gen was nearer to the bottom on 5 hours exactly. This time the Lenovo Vibe P1m was at the top of the table with 6 hours and 10 minutes while the Kult 10 was last again with 3 hours and 50 minutes.

Moving on to WiFi Browsing the Honor 5X managed to last for 6 hours and 11 minutes (image below.) This time that placed it close to the bottom of the chart. The Moto G 3rd gen and OnePlus X were both above it on 6 hours and 40 minutes and 6 hours and 39 minutes respectively. The Lenovo Vibe P1m was first again on a time of 14 hours and 38 minutes, while the Xolo Black 1X was languishing behind on a lowly 5 hours.

For the final category of Video Playback the winner was once again the Vibe P1m with a time of 16 hours and 5 minutes, although we should bear in mind that this phone has a 4000 mAh battery. As you can see in the image below, the Honor 5X gained a respectable third place with 12 hours and 29 minutes. The Moto G 3rd gen was in seventh position with 10 hours, and perhaps surprisingly the OnePlus X was at the very bottom of the table on 6 hours and 39 minutes.

The overall battery life of the Honor 5X as shown in this testing is pretty decent, mainly due to the Talk time and Video Playback results. You can see the other tables, and find out how Fone Arena conducts the tests from the source link below. You’ll also be able to see a One Charge Rating for the phone. Considering the Honor 5X battery life results, are you persuaded to buy this smartphone or not?