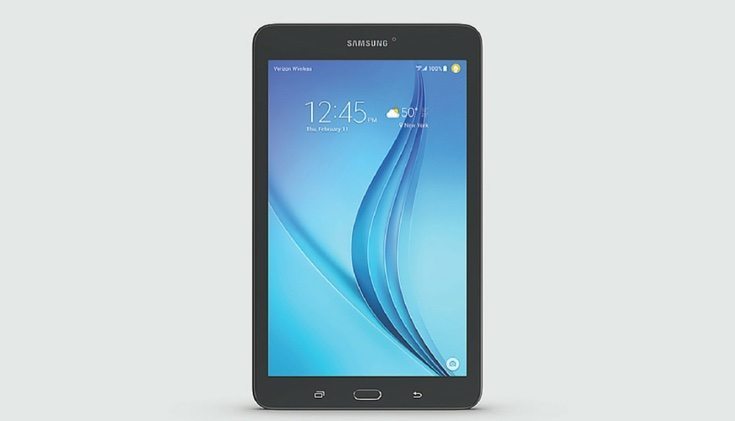 Samsung released the budget Galaxy Tab E 9.6 in summer last year, and last month followed up with the Samsung Galaxy Tab E 8.0. The mid-range GalaxyTab E 8.0 is now on sale at Verizon and adds 4G LTE connectivity to the mix. Read on for specs details of the tablet and of course the price on Big Red.

When we reported on the Samsung Galaxy Tab E 8.0 in January we told how it would have 4G LTE that the 9.6 version lacked. Verizon already offers the Galaxy Tab E 9.6 so it’s good to see the smaller device also arrive on Verizon Wireless, offering a bit more choice to customers looking for a new slate.

If you want to buy the Samsung Galaxy Tab E 8.0 outright from Verizon the price is $249.99 with no contract. Alternatively buyers can choose to purchase it for a price of $149.99 with a new two-year contract, or pay $10.41 each month for 24 months with a Verizon payment plan.

Specs of the Galaxy Tab E 8.0 include a 1.3GHz quad-core processor, and an 8-inch display with resolution of 1280 x 800. It has 1.5GB of RAM, 16GB of internal storage (expandable via microSD to 128GB), a 5-megapixel rear camera (no flash), and 2-megapixel front-facing snapper. Juice is provided by a 5000 mAh battery claimed to offer up to 21 hours of use. The device also features an Ultra power saving mode.

Before you buy you might be interested to know that a Galaxy Tab E 7.0 is also on the way. It recently appeared on the official Samsung Mexico website, but has not been officially launched yet and the entry does not give a price. Are you intending to purchase the Samsung Galaxy Tab E 8.0 on Verizon?