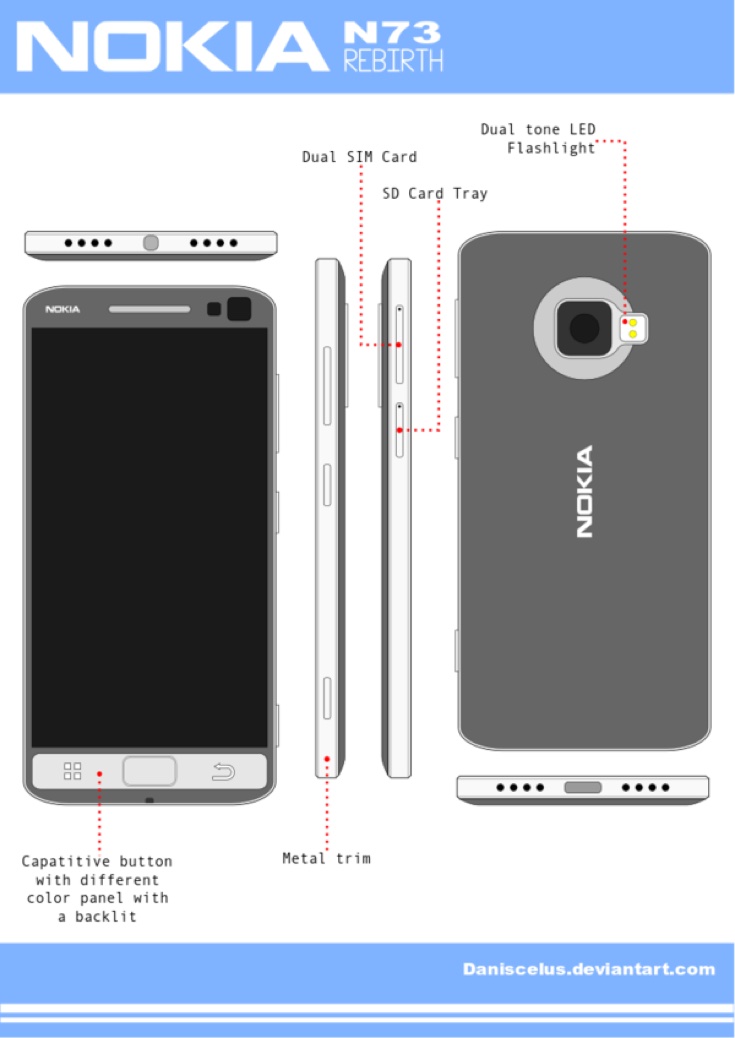 Throw your minds back to 2006 and we wonder how many readers might remember the Nokia N73. Now we have an interesting design to show you in the form of a Nokia N73 Rebirth concept. The idea offers a touch of nostalgia and also makes us wonder about possibilities for new Nokia phones.

Many readers will know that as part of Microsoft’s acquisition of the Lumia brand, Nokia is unable to launch any new smartphones until later this year. There have been rumors and leaks about a Nokia C1 and it’s thought this could be the first new Nokia-branded smartphone. However, we’ll stress that this is all unofficial at this stage.

While we wait for more on that we can at least check out this concept design from DeviantArt member Daniscelus. The back in particular is reminiscent of the N73, and although the basic format is similar the idea also manages to add new aspects to the mix. The image shows the back, front and sides of the Nokia N73 Rebirth and the handset has a metal trim.

On the front there are capacitive backlit buttons with colored panels, and at the top there’s a fairly sizeable camera module. Along the bottom there are dual speakers, while the dual SIM card slot and SD card tray are on one of the sides. Meanwhile on the reverse of the handset there’s a large camera area with dual tone LED flash.

Whether we’ll ever see anything like this Nokia N73 Rebirth from the company itself is doubtful. Still it’s an interesting idea, although there have been rumors that the next Nokia smartphone might involve using a Chinese manufacturer. Although the designer hasn’t provided any imagined specs for this new Nokia N73 vision, it would be interesting to try to guess what specs it might come with.

Are you eager to see Nokia launch a new smartphone? What are your thoughts on this Nokia N73 concept idea?