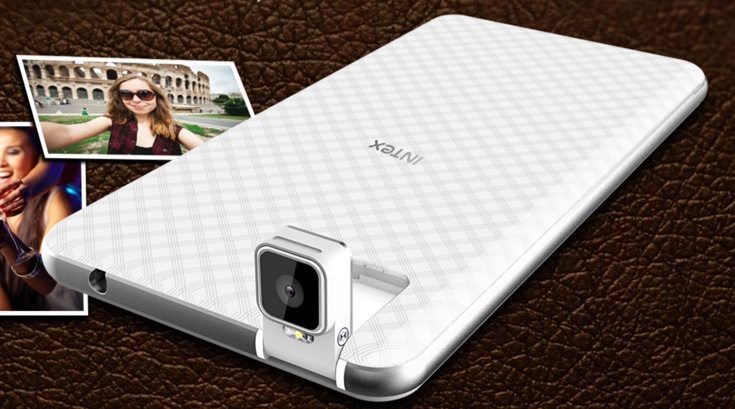 Another new budget smartphone from Intex has just been revealed for the market in India. The Intex Aqua Twist has a rotating camera and a low price. It’s already listed on the company’s official website so we anticipate availability very soon. Read on for specifications, price, and more.

The Intex Aqua Twist is a little different to the average affordable smartphone as its standout feature is a 5-megapixel camera that can rotate (hence the name). That means it can be used as both a rear-facing and front-facing camera. Although we’ve seen this featured on some mid and high-end smartphones before, we don’t very often see it on a budget device. One example though was the iBall Andi Avonte 5 that released last year.

Specifications of the Aqua Twist include a 1.3GHz MediaTek MT6580 quad-core processor and a 5-inch IPS display with resolution of 854 x 480. It has 1GB of RAM and 8GB of internal storage (expandable to 32GB with microSD card). Further Intex Aqua Twist specs include a 2200 mAh battery that should offer up to 18 hours of talk time or 275 hours on standby.

Connectivity is catered for with 3G HSPA+, WiFi 802.11 b/g/n, Bluetooth 4.0, GPS/A-GPS, and microUSB 2.0. The dual SIM phone has a 3.5mm audio jack, and it runs the Android 5.1 Lollipop operating system. The handset measures 144mm x 72mm x 8.4mm and weighs 175g. A few of the pre-loaded apps for the Aqua Twist include Amazon, Saavn, Newshunt, Opera Mini, Saavn, and Hike Messenger.

The Intex Aqua Twist price is Rs. 5,199 and it comes in black and white color choices. The handset has an attractive patterned design on the reverse. This new Intex phone has appeared hot on the heels of the Intex Cloud Breeze that was recently launched priced at Rs. 3,999. Do you like the look of the Aqua Twist?