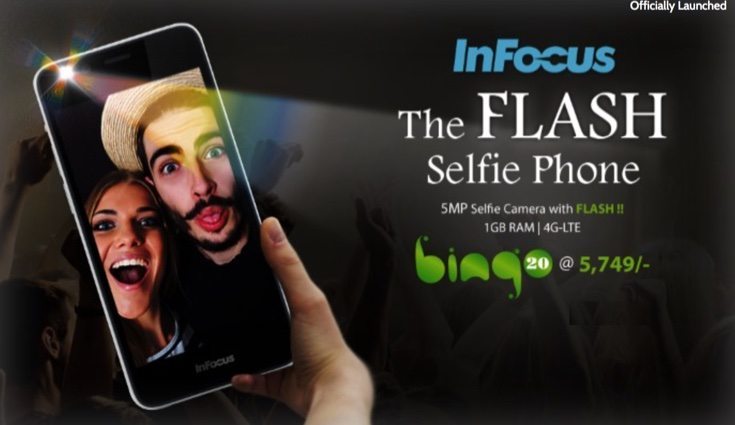 The InFocus Bingo 21 and now the InFocus Bingo 20 are fairly low-end devices as befits their budget price tags. However, they do feature 4G LTE connectivity so either is worth thinking about. The majority of specifications for the Bingo 20 are the same, except that it has only 1GB of RAM rather than the 2GB of RAM with the Bingo 21. That’s why the pricing of the new device may seem puzzling.

The new InFocus Bingo 20 price has been announced as Rs. 5,749. That’s more expensive than the price of the Bingo 21, which is Rs. 5,499 even though it has more RAM. The reason behind the higher price is said to be the availability factor. This is because the Bingo 21 is exclusively available at Snapdeal while the InFocus Bingo 20 will be available through offline stores as well as online.

Other than the change of RAM, other specs for the newly-launched Bingo 20 are a 1.5GHz Spreadtrum SC9830 quad-core processor, a 4.5-inch display with resolution of 854 x 480, and 8GB of internal storage (expandable with microSD card). It has an 8-megapixel rear camera with LED flash, and a 5-megapixel front-facing shooter that’s also equipped with LED flash. It’s juiced by a 2300 mAh battery and is a dual SIM handset with 4G LTE on both.

The InFocus Bingo 20 measures 136.8mm x 67mm x 10.82mm and will be offered in Blue, Orange, and White color choices. It runs the Android 5.1 Lollipop OS with the InLife UI 2.0 on top. Would you consider this new InFocus as your next smartphone purchase? If so, how do you feel about the InFocus Bingo 20 price?