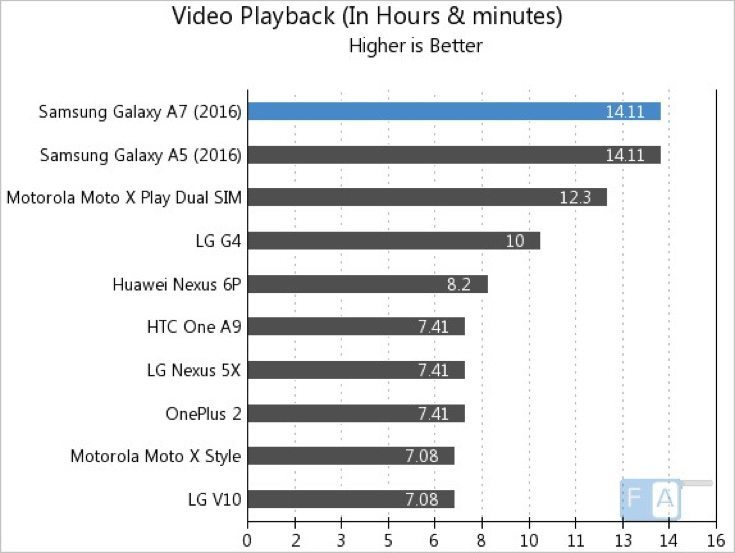 The new Samsung Galaxy A7 is equipped with a 3300 mAh battery with fast charging. If you want to find out more about it including further specs you might want to check out a Galaxy A7 (2016) vs Galaxy Note 5 comparison. Fone Arena has conducted its usual round of battery life testing on the Galaxy A7 (2016) and there are four main categories, Talk Time, 3G Browsing, WiFi Browsing, and Video Playback.

The results of each test were then entered onto tables comparing the time attained by the Galaxy A7 (2016) to nine other smartphones. As well as the 2016 Samsung Galaxy A5 (2900 mAh battery) and the Moto X Play (3630 mAh battery), just a few of the other handsets that the Galaxy A7 2016 battery life is compared with are the OnePlus 2, HTC One A9, and Moto X Style. For the sake of brevity please note that from now when we refer to the Galaxy A7 and Galaxy A5 we are referring to the 2016 versions.

In the Talk Time category (see image direct below) the Galaxy A7 was almost halfway down the table with a time of 25 hours and 2 minutes. The Moto X Play (Dual SIM) and Moto X Style were in joint first place with 33 hours and 19 minutes, with the Huawei Nexus 6P just behind on 33 hours and 18 minutes. The Galaxy A5 was further down with a time of 20 hours and 3 minutes, the same as for the LG V10. In equal last place were the LG Nexus 5X and HTC One A9 on just 16 hours and 40 minutes. 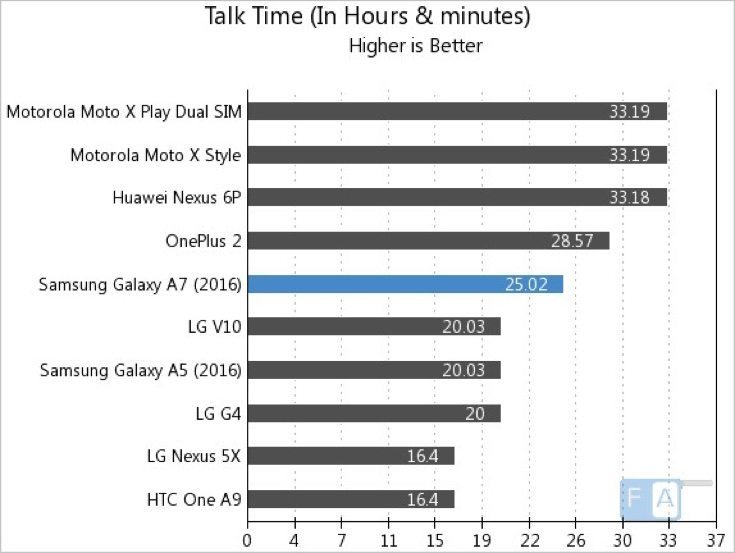 For 3G Browsing the Galaxy A7 took the top spot with an impressive time of 10 hours and 2 minutes. It was quite a distance ahead of the Galaxy A5 that took second position on 6 hours and 41 minutes. The Moto X Play was third with a time of 6 hours and 15 minutes. This time the Moto X Style languished at the bottom of the table on only 3 hours and 34 minutes.

The final category was Video Playback and the new Galaxy A7 and Galaxy A5 took joint honours in first place with times of 14 hours and 11 minutes (see image below story). The Moto X Play was third again on 12 hours and 30 minutes. Once again the Moto X Style was in last place, this time jointly with the LG V10 with times of 7 hours and 8 minutes.

If you would like to see the other tables, details of the battery testing procedures, and a One Charge Rating for the phone, please head to the source link below. Overall the Samsung Galaxy A7 2016 battery life was very impressive, and much better than the previous A7 model. Buyers can be reassured that as far as battery life is concerned the phone offers good performance.

Are you satisfied by the battery life performance of the Galaxy S7 (2016) as shown in this testing? Have you now decided to buy this Samsung smartphone?