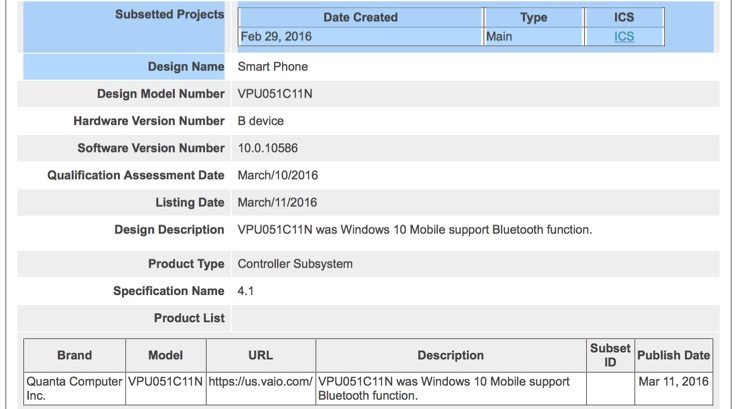 A new VAIO VPU051C11N Windows 10 phone has reached the certification stages. This follows the February unveiling of the VAIO Phone Biz smartphone that also runs Windows 10 Mobile and will release next month. It seems unlikely that these devices are one and the same though, as the model numbers are so different.

There’s always plenty of interest in new Windows 10 smartphones, and the VAIO Phone Biz (model number VPB0511S) was announced in early February. The maker said that the business-aimed Phone Biz would release in Japan in April, but did not announce whether it would also be released internationally. The new VAIO phone that has been spotted has model number VPU051C11N, and it’s manufactured by Quanta Computer based in Taiwan.

The phone has been approved for certification at the Bluetooth SIG (Special Interest Group), which reveals it to be running Windows 10 Mobile. The Bluetooth SIG filing for the phone shows that it’s using software version number 10.0.10586, which is the RTM build. Apart from the difference in model numbers there’s another reason that the VPU051C11N is not likely to be a variant of the VAIO Phone Biz. That’s because it was previously confirmed that there were no plans for a US launch of that phone.

Unfortunately the Bluetooth SIG documentation does not reveal specs of the VAIO VPU051C11N. However, one thing we can say is that now that this model has appeared in certification, we’re likely to see further signs of it soon. It’s often the case that new devices reach an official launch shortly after receiving the necessary certifications.

We’ll be following this device with interest and will give more information as we hear it. Would you like to see a new VAIO smartphone running Windows 10 Mobile make an international release? Drop us a comment to let us know.