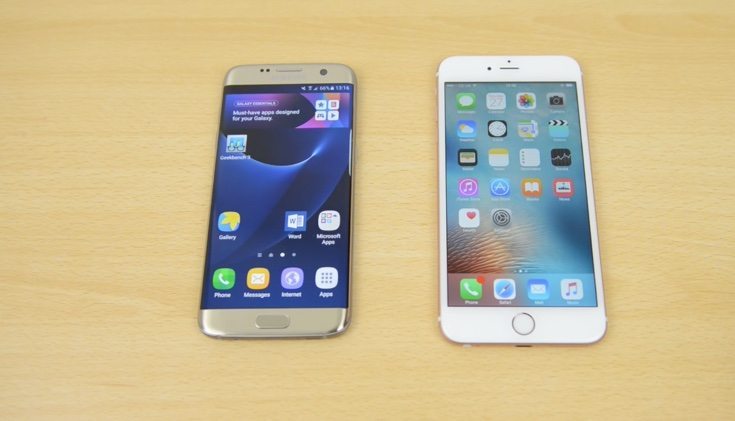 The recently launched Samsung Galaxy S7 Edge has some seriously impressive specifications. They include a Snapdragon 820 quad-core or Exynos 8890 octa-core processor with either Adreno 530 or Mali-T880 MP12 graphics respectively (regions vary). It has 4GB of RAM, and runs the Android 6.0 Marshmallow operating system.

On the other hand the iPhone 6S Plus has an Apple A9 dual-core processor, PowerVR GT7600 graphics, and just 2GB of RAM. It launched on iOS 9 now upgradable to iOS 9.2.1. On the face of it the Galaxy S7 Edge has the upper hand on specs, although we should remember that software optimizations can add a lot to the performance of a device. The above specs also apply to the regular Galaxy S7 vs iPhone 6S.

Below this article we’ve embedded a video showing Samsung Galaxy S7 Edge vs iPhone 6S Plus speed testing and real-world performance. The S7 Edge being used in this testing is equipped with the Exynos 8890 processor. The comparison begins by showing benchmark results for both handsets. In Geekbench 3 the iPhone has the edge over the Samsung phone on single-core scores but that’s reversed with the multi-core scores.

We’re not going to give away all the results here, as we don’t want to spoil the suspense for when you watch the video. However, we will say that there are some mixed outcomes and it’s a closer run thing than we might have expected. When you’ve taken a look at the Samsung Galaxy S7 Edge vs iPhone 6S Plus speed testing video below, we’d be interested to hear from you. Were you surprised at some of the results of speed performance in this testing?