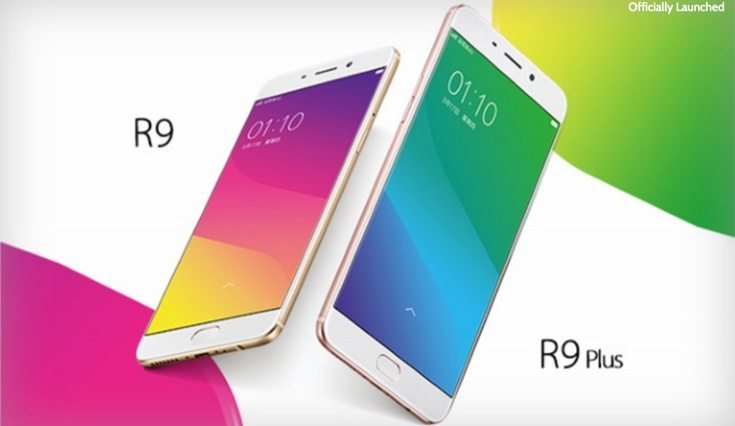 We knew it was coming and now we can tell you the official details of the Oppo R9 and Oppo R9 Plus smartphones from the launch today. Although the many leaks made us feel we already knew what to expect, it’s always good to see specs and more confirmed. We also have news on the Oppo R9, R9 Plus prices from the official launch.

Both of these new Oppo smartphones have just been unveiled in China, and the official specs are virtually a match for those that were leaked on several occasions. As far as the designs are concerned, the handsets have a metal body with a fingerprint sensor incorporated into the Home button at the front. They both run Android 5.1.1 Lollipop skinned with Oppo’s Color OS 3.0.

The Oppo R9 has a 5.5-inch display with Full HD resolution of 1920 x 1080 and it’s equipped with a 2GHz Helio P1 octa-core processor. It has 4GB of RAM, and 64GB of internal storage (expandable to 128GB via microSD). It carries a 16-megapixel rear camera with LED flash, a 13-megapixel front-facing shooter, a 2850 mAh battery, and 4G LTE connectivity.

Moving on to the Oppo R9 Plus this has some of the same specs but steps up in a few areas. It has a larger 6-inch display (also Full HD resolution), and packs a Snapdragon 652 64-bit octa-core processor. It still has a 16-megapixel rear camera but also has a 16-megapixel front-facing unit. As well as this it’s equipped with a 4120 mAh battery with VOOC flash charging.

The Oppo R9, R9 Plus are both dual SIM handsets. While the regular R9 is 6.6mm thick and weighs 145g, the Oppo R9 Plus is 74mm thick and weighs 185g. They will be sold in a choice of Gold or Rose Gold colors. There’s not long to wait for availability as the Oppo R9 will release on March 24 while the R9 Plus releases on April 12. That applies to China but so far news on availability for other markets has not been given.

Are you pleased to learn that these Oppo smartphones are now official? What are your thoughts on the Oppo R9, R9 Plus prices?