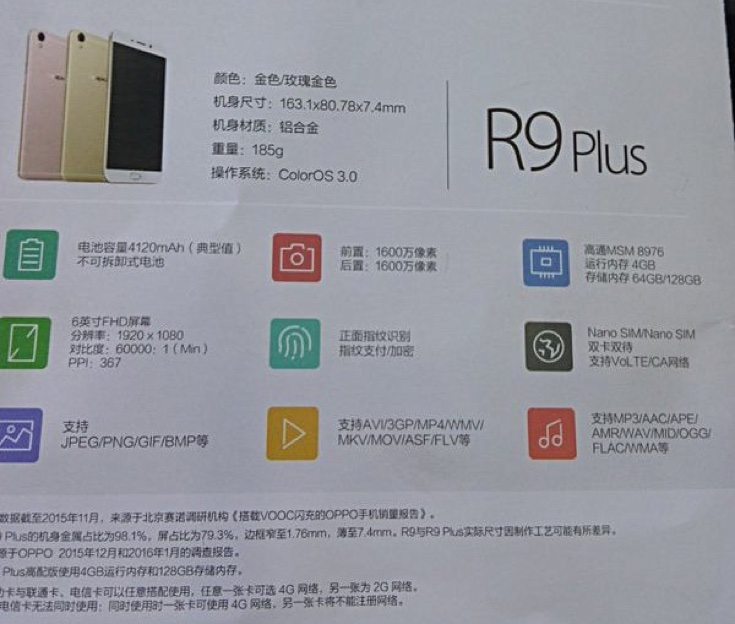 Oppo is set to officially reveal the Oppo R9 and Oppo R9 on March 17, and there’s plenty of interest in the high-end smartphones. As well as company teasers we’ve also sees several leaks on specifications and more. Now the Oppo R9 and R9 Plus specs in this latest leak differ slightly from the earlier reveals.

Earlier this month we reported on a TENAA certification sighting for the Oppo R9 and R9 Plus, and this gave us many of the specs of these upcoming handsets. The new leak comes from prolific leaker Steve Hemmerstofer aka @OnLeaks who has a solid reputation for information on upcoming devices. Although the majority of the specs tally with those from the earlier TENAA spot, there are also some differences.

The leak appears to be an official specs list for the devices, and the Oppo R9 is shown as having an octa-core processor, a 5.5-inch AMOLED display with Full HD resolution, and 4GB of RAM. It has 64GB of internal storage, a 16-megapixel rear camera, 13-megapixel front-facing camera, and a 2850 mAh battery. The previous TENAA spot gave 32GB of internal storage and both cameras with 16-megapixel sensors. 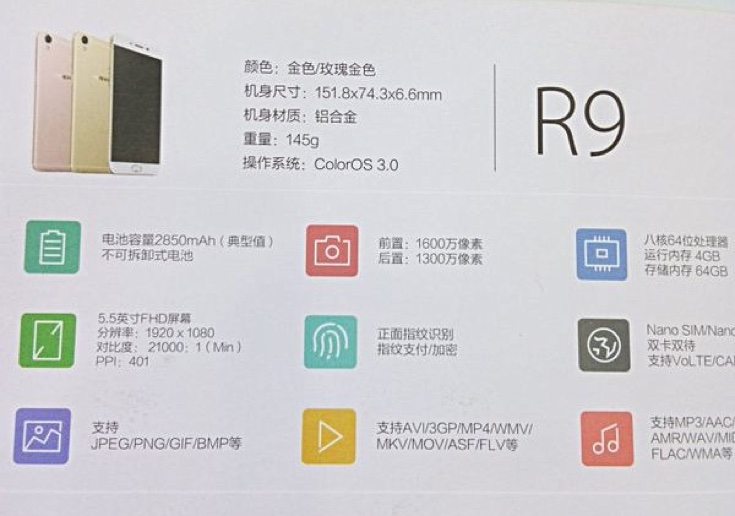 Meanwhile the Oppo R9 Plus is equipped with a Snapdragon 652 octa-core processor, and steps up to a 6-inch Full HD display. Like the regular version there’s 4GB of RAM, but as well as a 64GB option for internal storage there’s also a 128GB model. It has a higher capacity 4120 mAh battery, and this time both cameras are shown as having 16-megapixel sensors.

We also know from the official teasers that the phones will have fingerprint sensors and feature VOOC fast charging. Pricing is not confirmed at this point but earlier this week we reported on a price leak that could be accurate. The phones will release running the Android-based ColorOS 3.0.

Fortunately there’s not too long to go until we’ll know if the specs listed at TENAA or in this latest specs leak are accurate. We’ll bring all of the confirmed details and hopefully availability news from the official launch next week. Are you waiting to hear more about the Oppo R9 and R9 Plus?