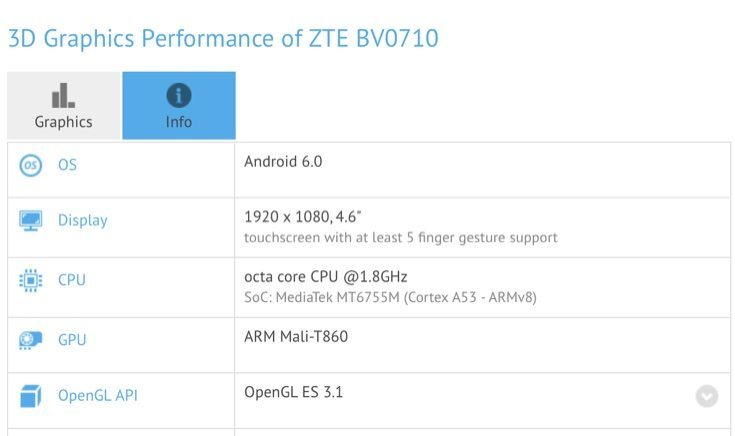 There has been a steady succession of new smartphones from ZTE recently, and now it appears another is on the way. We don’t know the name yet but a model number has shown up in benchmarking. This ZTE BV0710 benchmark spot has revealed some specs of the device.

It’s often the case that the first sightings we see of upcoming device come from benchmark test appearances. The ZTE BV0710 has now appeared in GFXBench documentation and this is a smaller handset than many of the ones we typically see arriving these days. It may not have a large display but it does appear to have some very decent specifications.

The ZTE BV0710 benchmark filing shows it to have a 4.6-inch display with Full HD resolution of 1920 x 1080. It packs a 1.8GHz MediaTek MT6755M octa-core processor, ARM Mali-T860 graphics, and 3GB of RAM. It has 32GB of internal storage, and connectivity options of the single SIM device include WiFi, Bluetooth, and GPS. There’s also an array of sensors including accelerometer, pedometer, proximity, and gyroscope.

There’s a main 16-megapixel camera with LED flash at the back, and also an 8-megapixel front-facing shooter. It will be running the Android 6.0 Marshmallow operating system on release. Unfortunately the listing does not give us the battery capacity or any images of the handset itself. However, now it has been reached the benchmarking stage we’d expect to be hearing further news on the ZTE BV0710 soon.

Readers might also be interested in some other recently revealed ZTE smartphones. These include the ZTE Blade V580, the ZTE Blade D2, and the ZTE Blade V7 and Blade V7 Lite. In the meantime we’ll keep you informed with further developments on the BV0710 so do check back with us for more.

Will you be following new about the ZTE BV0710? Do you like the sound of a new ZTE smartphone with a smaller display? Let us know with your comments.