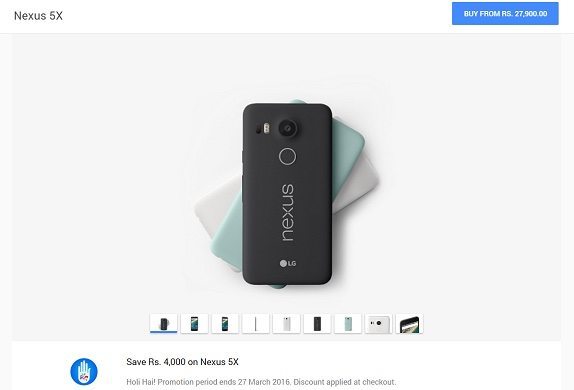 The LG-made Nexus 5X released in the later part of last year, and if you haven’t got round to buying one yet there’s some good news if you’re one of our readers in India. There’s a Nexus 5X price slash on the Google Store India, but you might want to hurry as this is a limited time offer.

Google has issued this deal to mark the upcoming Holi festival and the price cuts will last until March 27th. Unfortunately the current offers only apply to the Nexus 5X and not the larger Nexus 6P that also released last year. The Nexus 5X price for the 16GB model will be Rs. 23,990 instead of Rs. 27,900. If you want the 32GB model the price will be Rs. 27,990, down from Rs. 31,900. Those are both decent discounts that are well worth having.

When the Nexus 5X was first on sale on the Google Store India the 16GB model was priced at Rs. 31,900 while the 32GB variant was Rs. 35,900. Therefore this is not the first time that Google has reduced the Nexus 5X price, and it’s worth noting that it’s still worth shopping around at other retailers to see if prices elsewhere are even less.

Key specs of the Nexus 5X include a Snapdragon 808 hexa-core processor, a 5.2-inch Full HD display, and 2GB of RAM. It has a 12.3-megapixel rear camera, 5-megapixel front-facing snapper, and is juiced by a 2700 mAh battery. For more details you might like to check out a Nexus 5X vs OnePlus X comparison. We’ll point out that only this week the phone received a software update bringing performance optimizations and bug fixes.

What do you think of these current Nexus 5X price cuts at the Google Store India? Remember you only have until March 27th to take advantage of these offers.