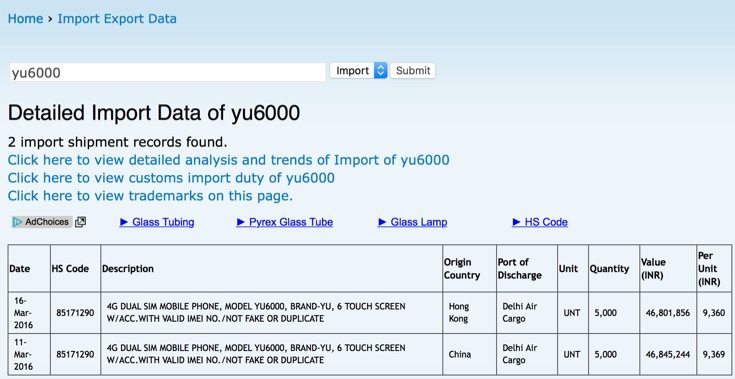 It was back in November last year that we first heard of a new YU smartphone on the way, when a device dubbed the YU YU6000 Yuphoria turned up in benchmark testing. Things then went very quiet but it seems it was all going on behind the scenes, and the YU YU6000 is closer to a launch following an import sighting.

Zauba is a well-known import/export site, and very often when we see devices show up on the company’s database we see an official unveiling soon after. The new listing is for a phone titled simply as the YU YU6000 rather than the YU YU6000 Yuphoria name that we saw previously. It’s possible that the company has dropped the Yuphoria part of the name as it looks more likely to be a Yureka Plus successor, or that the new smartphone’s title has not been finalized yet.

The filing doesn’t give us much to go on in the way of specs, but does show thousands of units of the 4G Dual SIM phone with a very sizeable 6-inch display. That’s a huge variation as the previous GFXBench listing showed it as having a 4.6-inch display, although the 6-inch display seems more likely.

Other unofficial specs that have leaked so far include a 1.5GHz MediaTek MT6753 octa-core processor, Mali T720 graphics, 3GB of RAM, and 16GB of internal storage (expandable via microSD). The 6-inch display is thought to have Full HD resolution of 1920 x 1080. There’s a 13-megapixel rear camera and an 8-megapixel camera up front, and Android 5.1 Lollipop will be running the show.

We’ll remind readers that until YU announces the phone these specs are unconfirmed. The value per unit on the Zauba listing is Rs. 9,360. This is not usually the final retail price but from this we could expect it to have a price tag of around Rs. 10,000 when it becomes available.

Have you been waiting to hear more about the YU YU6000 smartphone? If the above specs and pricing turn out to be accurate, would you add it to your device wishlist?