The Galaxy Note usually arrives a little late to the party compared to other smartphones, but it always packs a punch. We expect 2016 to be no different, and all signs point towards a top-tier flagship from Sammy. Previous rumors hinted at 6GB of RAM for the Samsung Galaxy Note 6 release, and now we have a bit of news on its processor. 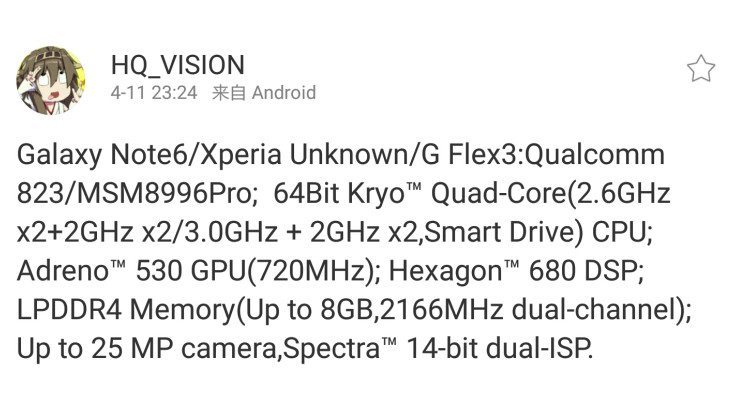 Today’s Samsung Galaxy Note 6 rumor hails from the Far East where a tipster leaked some news on several unannounced smartphones. While you’ll want to take it with a dose of salt, the rumors says the Samsung Galaxy Note 6 would roll out with a Snapdragon 823, a chip believed to be a slightly faster version of the regular 820. It’s certainly not inconceivable, and it’s not the first device rumored to arrive with that particular chip. The leaker also mentioned the LG G Flex 3 and an unannounced Xperia device as you can see from the screenshot above.

Whatever Samsung throws under the hood of the Samsung Galaxy Note 6, you can expect it to be one of the more powerful devices of the year. Getting a late rollout has its advantages, especially when you drop your flagship right before the busy holiday season.

What would you like to see from the Samsung Galaxy Note 6 specifications?