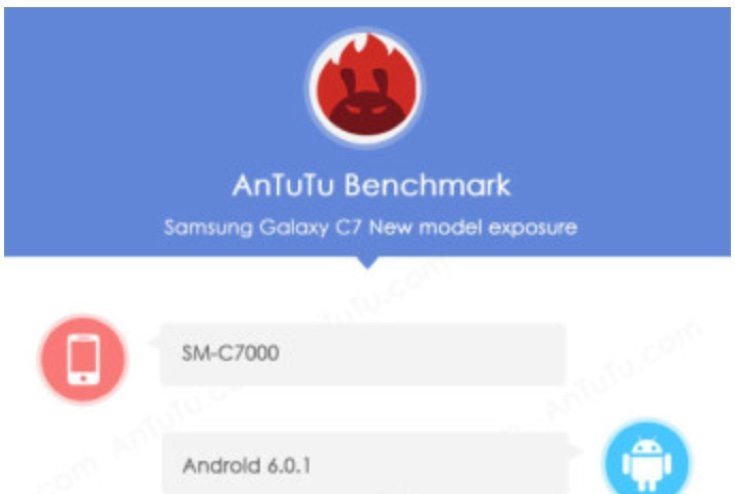 Some readers may have heard recent rumors about an upcoming new Samsung Galaxy C series of smartphones. Only yesterday we gave some news on the Galaxy C5 when model number SM-C5000 showed up in benchmarking. We expected a C7 version as well, and now Samsung Galaxy C7 specs have also shown up after the C5 spot.

Rumors suggest that the new Samsung Galaxy C smartphones will launch next month. Although it’s thought they will be exclusively available in China at first, it’s possible that they might release in further markets at some point. In our report on the Galaxy C5 yesterday some specifications had been revealed from a Geekbench benchmark filing. A source also stated that the new C series of phones would have slim metal builds.

This time it’s the expected Samsung Galaxy C7 (model number SM-C7000) that has been spotted in benchmarking, this time on AnTuTu. This has disclosed some of the key specifications, and it’s no surprise that they are a slight upgrade over those of the Galaxy C5. Samsung Galaxy C7 specs disclosed by the filing include a Snapdragon 625 processor and Adreno 506 graphics. It has 4GB of RAM and 32GB of internal storage, with a 16-megapixel main camera at the rear and 8-megapixel snapper up front.

The phone was running the Android 6.0.1 Marshmallow OS during the benchmark test. The display is listed as having Full HD resolution of 1920 x 1080 although the filing doesn’t give the screen size. The C5 was shown as having a 5.2-inch display so the Galaxy C7 could be around 5.5-inches. It’s likely that we’ll hear much more about the upcoming Samsung Galaxy C series over the coming weeks so do check back with us for more.

What are your first impressions of the upcoming Samsung Galaxy C7 and C5? Do you hope that Samsung will also release these smartphones outside China?