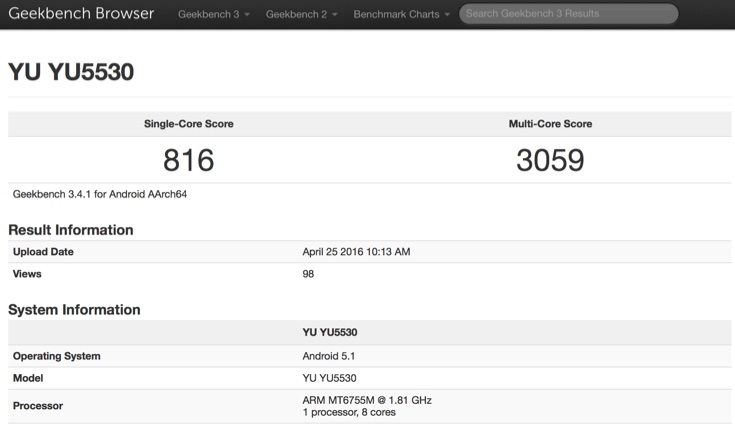 This is a short item of news but nevertheless interesting for all those who are fans of YU smartphones in India. It appears that another new one is on the way following the recent launch of the Yureka Note. There has been a sighting of some YU Yu5530 specs tipped from a benchmark filing. The phone is set to be a mid-range handset and we’ll tell you what we know so far.

The Yu Yureka Note recently arrived and it has a large 6-inch display and further impressive specs. The Yureka Note has 3GB of RAM but the newly sighted YU Yu5530 is revealed as having 4GB of RAM by a Geekbench benchmark appearance. The filing also shows that the Yu5530 has a 1.8GHz MediaTek Helio P10 octa-core processor.

The listing shows the device to be running the Android 5.1 Lollipop operating system. It may offer Cyanogen OS but that has not been detailed yet. Unfortunately the listing doesn’t give us any further specs for the device so we can only speculate for now. However, as far as the benchmark is concerned the YU Yu5530 scored a single-core result of 816 and a multi-core result of 3059.

YU Televentures is a subsidiary of Micromax and has seen plenty of success with its offerings so far. It’s thought that the Yu5530 will be priced somewhere between the YU Yureka Note at Rs. 13,499 and the Yu Yutopia that launched at Rs. 24,999. Of course we’ll keep readers in the loop with more news about the YU Yu5530 as it reaches us.

Are you pleased to hear about the new YU Yu5530 on the way? What other specs and features would you like to be included with this new YU smartphone? Why not drop us a comment in the box below.