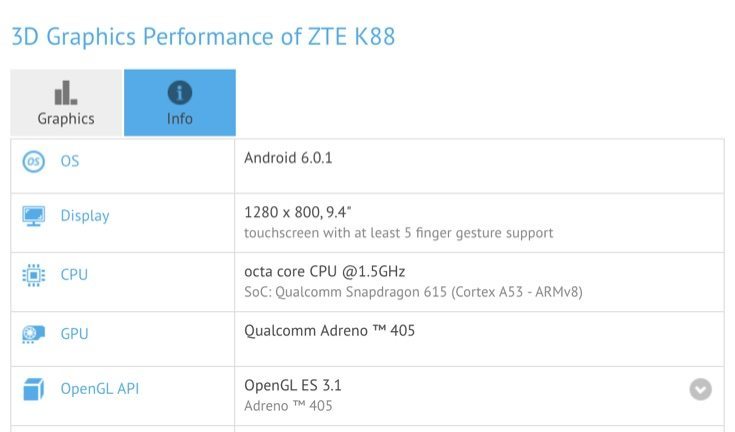 This next item of news could interest those looking for a new tablet, especially fans of ZTE devices. Some ZTE K88 specs for the 9.4-inch tablet have been revealed from a benchmark spot. It’s worth saying that K88 is unlikely to be the final name of the device, so do bear that in mind.

It’s often the case that we see our first signs of upcoming devices on benchmark databases, and the ZTE K88 has made an appearance in a GFXBench filing. This discloses some of the main specifications, and the K88 has a 9.4-inch display with resolution of 1280 x 800. The tablet is equipped with a 1.5GHz Qualcomm Snapdragon 615 octa-core processor and Adreno 405 graphics.

Further ZTE K88 specs include 2GB of RAM and 8GB of internal memory that can be expanded via microSD. There’s a 5-megapixel camera at the rear with autofocus, face detection, touch focus, and LED flash, and at the front there’s another 5-megapixel sensor. Connectivity options include the usual WiFi, GPS, and USB and the tablet was running the Android 6.0.1 Marshmallow OS during benchmarking.

Unfortunately there’s no revelation about the battery size just yet, but we expect to hear more about that soon. While we wait you might also be interested to know that the ZTE Axon 2 smartphone is also expected soon. A handset dubbed the ZTE A2017 recently turned up at TENAA and it’s thought this is the Axon 2. Also just yesterday we reported on a possible price spot of the device when it became listed at Oppomart.

Back to the ZTE K88 though, and usually when we see devices start appearing in benchmark sightings, an official launch is not too much further away. We’ll bring you confirmed details about the new ZTE K88 tablet as we hear it. Does this sound like a device that you might be interested in?