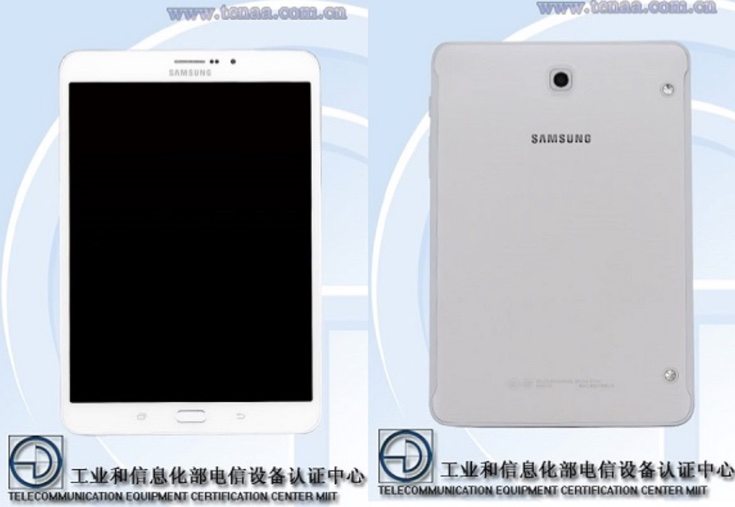 Back in February some new Samsung tablets turned up in a benchmark filing with model numbers SM-T719 and SM-T813. These appeared to be the upcoming Galaxy Tab S3 8.0 and Tab S3 9.7. Now a Samsung Galaxy Tab S3 8.0 TENAA spot has surfaced and this shows the specs along with some images of the smaller tablet.

The new Galaxy Tab S3 tablets (the names are not actually confirmed yet) will succeed the Galaxy Tab S2 8.0 and S2 9.7 that released last year. TENAA is a Chinese regulatory body and we often get our first clues about specifications of upcoming devices when they become approved here.

The documentation reveals that Samsung Galaxy Tab S3 8.0 specs include a 1.8GHz Snapdragon 652 octa-core processor, rather than the 1.9GHz Exynos 5433 processor of the Tab S2. Other specs of the Tab S3 8.0 are virtually the same as the earlier Tab S2 and also tie in with that earlier benchmark appearance. It has an 8-inch AMOLED display with resolution of 2048 x 1536, 3GB of RAM, and 32GB of internal storage (expandable).

The camera set-up consists of an 8-megapixel rear camera and 2-megapixel front-facing snapper, and the juice will be kept flowing by a 4000 mAh battery. The TENAA listing also shows some images of the Samsung SM-T719C, and design-wise the Galaxy Tab S3 8.0 also looks much the same as the S2 8.0. There’s a physical Home button with capacitive touch buttons either side, and it measures 198.6mm x 134.8mm x 5.6mm and weighs 272g.

One bonus of the newer tablet is that it will release running the Android 6.0 Marshmallow OS. Now that the device has turned up for TENAA approval, it shouldn’t be too much longer until we hear something official. Depending on the price, would you be interested in purchasing the Samsung Galaxy Tab S3 8.0?