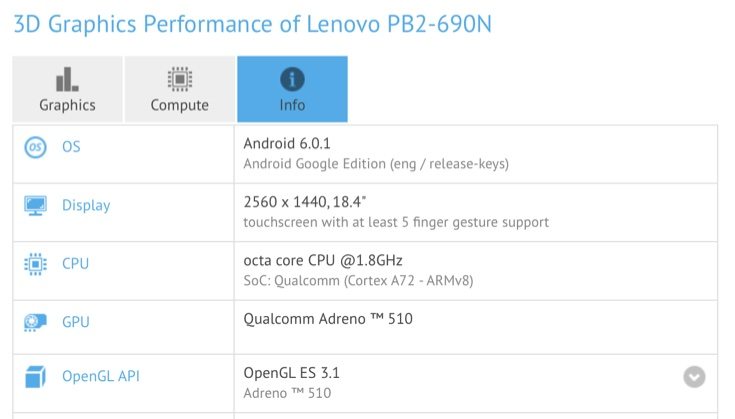 Some readers may know about the Samsung Galaxy View, a giant 18.4-inch tablet that released late last year. It looks as though a competitor is on the way as a new Lenovo PB2-690N 18.4-inch tablet is the subject of a benchmark spot. This has disclosed some of the specs of the upcoming device.

Lenovo is holding a press event on June 9th at Tech World 2016. Up to now we’ve been anticipating that some new Moto smartphones will be launched during the event, and there’s a prospect of the Lenovo Project Tango smartphone. Now it seems that we could also see this new whopping Lenovo tablet.

The device has turned up in on GFXBench with the Lenovo PB2-690N model number, and the benchmark filing lists some key specifications. It has a massive 18.4-inch display with QHD resolution of 2560 x 1440. While the screen size is the same as the Galaxy View, this new Lenovo tablet has higher resolution. It’s listed as having a 1.8GHz octa-core processor that will sport either a Snapdragon 650 or Snapdragon 652 chipset, with Adreno 510 graphics.

Further specs include 4GB of RAM and 64GB of internal memory, and it has an 8-megapixel rear camera with a 0.3-megapixel front-facing unit. Interestingly the benchmark listing shows the Lenovo PB2-690N is running Android 6.0.1 Marshmallow, and underneath are the words “Android Google Edition.” At this stage we can’t be sure if GFXBench is merely pointing out that Android is attached to Google, or whether this means the tablet might be running stock Android.

It still remains to be seen if there will be a growing demand for these huge tablet sizes, as the Samsung Galaxy View didn’t exactly take the world by storm. However, we’re certainly interested to hear more about this new Lenovo tablet and we’ll be back with more as it comes. What are your first thoughts about the Lenovo PB2-690N?