Asus ZenFone 3 specifications may have appeared through AnTuTu

The Asus ZenFone series has been the company’s most popular smartphone lineup to date, and it appears we may have gotten a glimpse of their latest handset. The Asus ZenFone 3 specifications have come to light ahead of an official announcement, and we’re here to bring you the scoop.

Last week, we learned the Asus ZenFone 3 release date was quickly approaching thanks to a teaser from the company’s CEO, Jerry Shen. Shen said the device would arrive in June, and Computex is the likely source around the first of the month. Details on the Asus ZenFone 3 specifications have been light, but the curtain has been pulled back today thanks to a new AnTuTu listing. 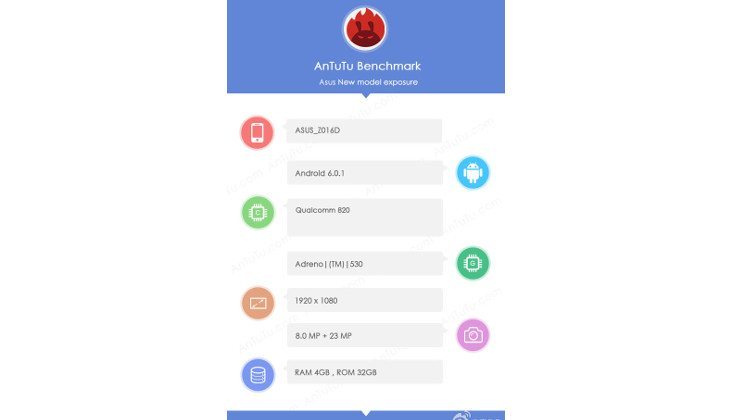 A model dubbed the Asus Z016D has shown up in the benchmark listings and is believed to be the upcoming Asus ZenFone 3. While there’s always a chance that it’s a different handset, all signs point towards the ZenFone 3 given that it will have a Snapdragon 820 and 4GB of RAM. That’s the flagship combo we’ve talked so much about, and it will pair nicely with 32GB of internal storage and the FHD display. The only other Asus ZenFone 3 specifications shown are the cameras which clock in at 23MP on the front and 8MP in the rear, and Android 6.0.

The Asus Z016D may not have an official moniker yet, but it looks to be in the flagship range and should be affordable to boot. With Computex right around the corner, you can expect to hear more news about the upcoming Asus ZenFone 3 release date in the weeks ahead.

Are you interested in the Asus ZenFone 3 or will it all come down to the price tag?