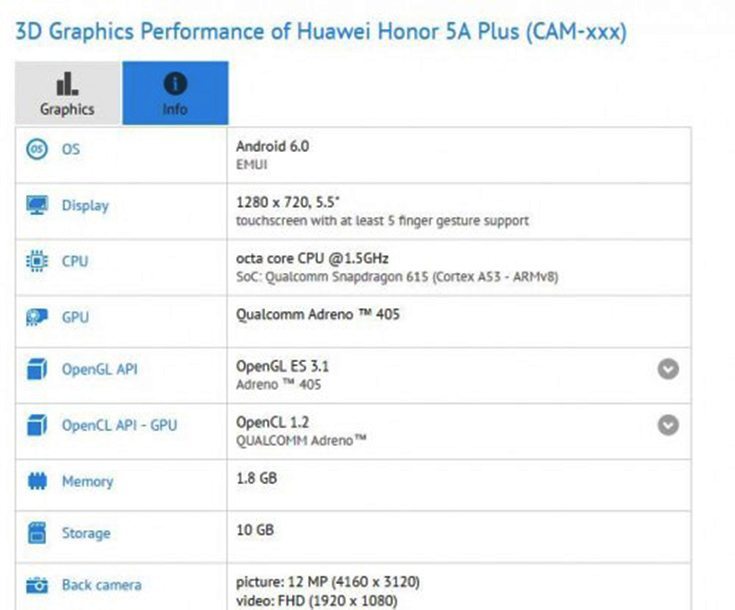 Tomorrow, on the 12th of June, Huawei is launching the Honor 5A at their official event. The teasers for the same were doing the rounds and it looks like we may have more than just the Honor 5A. The Honor 5A Plus just passed through GFXBench and the specs have been revealed. It may very well be announced along with Honor 5A at the event tomorrow.

Huawei is aiming to become the top dog in the smartphone realm by 2021 or so was said by their chairman Richard Yu at a tech conference in Hong Kong. They even showed off some impressive statistics to back up their ambitions. They are not leaving any stone unturned and have had tremendous growth in the past few years.

The big brother of the Honor 5A, the Honor 5A Plus comes with a 5.5inch display with a resolution of 1280×720 pixels. This is a bit of a disappointment considering the fact that the other phones in this category come with a full HD display. Most of the other specifications are also a disappointment and it has to be seen whether Huawei will launch these devices outside of China.

It might not make it to India where the budget category is ruled by Xiaomi, LeEco, and Asus. The Honor 5A Plus comes with the old Snapdragon 615 SoC with Adreno 405 GPU. There is the usual 2 gigs of RAM and 16GB of internal storage which is the bare minimum.

The camera in the listing is given as 12MP but it will most probably be a 13MP shooter at the rear and an 8MP selfie camera in the front. The 3,000mAh battery will be adequate enough to allow the phone to run for a day. The specs of the Honor 5A Plus were earlier leaked by a TENAA listing and the GFXBench listing confirms most of the specs except for the camera. Huawei’s event tomorrow will confirm all the rumors, speculations, and predictions.