We’ve seen a large increase in Samsung Galaxy Note 7 news lately, and things don’t appear to be slowing down anytime soon. Today’s rumors touch on the chipset, as we may have learned which processor the new Note 7 will sport this year.

It’s safe to say a lot of folks are excited for the Samsung Galaxy Note 7 release date to arrive. As the days creep closer, more leaks are hitting the net, and we’ve yet to hear anything truly farfetched this time around. Previous rumors point towards an Edged future and Iris Scanner, but several other details are unclear… including the processor. A new report suggests they will play the variant game again this year as some regions will get a Snapdragon while others will go the Exynos route.

According to a new leak from the wild world of Weibo, the Samsung Galaxy Note 7 will have a Snapdragon 821 clocked at 2.3GHz for some regions while others will receive the 2.6GHz Exynos 8893. That’s really no big surprise, and the leak also backs up @evleaks claims of a 5.7-inch QHD panel, a 12MP/5MP camera combo, and 64GB of storage. 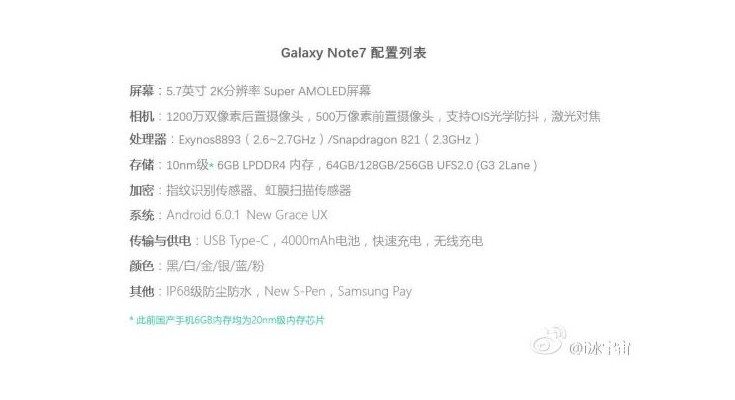 While it’s great to get some confirmation (to a degree) of previous leaks, it’s even better to get more information. The Weibo leak also suggests the Samsung Galaxy Note 7 will have 6GB of RAM and two other storage options at 128GB and 256GB — with expansion. Take that lightly folks. The report also mentioned a USB Type-C port, which should be a lock along with Android 6.0.