While we only cover a fraction of the smartphones and slates that pass through the benchmark listings, rest assured, those wheels never stop turning. The Lenovo P2c72 has passed through Geekbench today, which means we have a new handset to discuss in the Lenovo Vibe P2.

There was a time when Lenovo wasn’t a name heard all that often in the smartphone world. Since the company took over Motorola, that has changed and we are seeing more handset across the board. That’s a good thing, as they have put out some affordable devices that are easy on the eyes and have solid specs. We are not quite sure what the Lenovo P2c72 will look like, but it is believed to be the Lenovo Vibe P2. 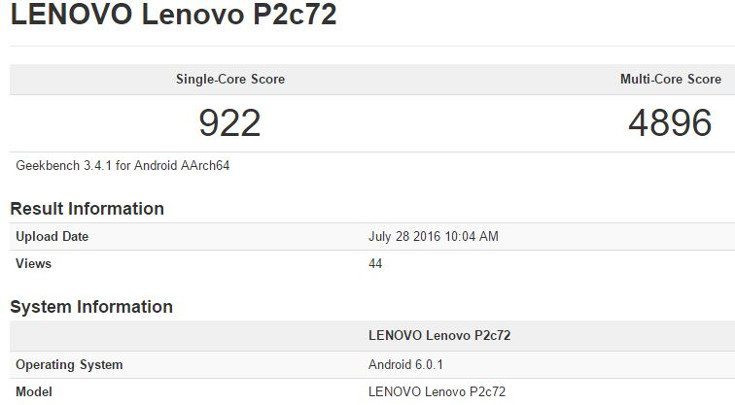 The handset on Geekbench will sport a Snapdragon 625 under the hood, a chip we’re starting to see a whole lot more of on the mid-range side of things. The processor will get some help from a hefty dose of RAM with 4GB and is listed as running Android 6.0.1. That’s all the listing tell us, but it’s safe to expect the same specs if not better than what we saw on the Lenovo Vibe P1. That handset had 32GB of RAM, a 5.5-inch FHD panel, a fingerprint scanner, and a 13MP/5MP camera combo.

While we only have a partial listing of the Lenovo Vibe P2 specs, it’s safe to say they aren’t going to downgrade from the previous model based on what we’ve seen. The original had several variants as well, so it will be interesting to see if the same proves true for the sequel when it arrives.