LG V20 specs rumored to include Snapdragon 820 and FHD display

The LG V10 was a bit of a surprise when it launched late last year, but we assumed a follow-up was in the works given its popularity. The LG V20 specs are the subject of a new rumor today, which puts the phone in the flagship class alongside the newly announced Note 7 and upcoming iPhone 7.

What makes a flagship? It’s a good question, and in 2016 it’s safe to say that would include a QHD panel and the somewhat standard fingerprint scanner along with high-powered innards. The LG V20 specs would certainly put it in that class if a new rumor pans out with one major exception. Whereas the previous handset sported a sharp 5.7-inch QHD panel, the new model may receive a bit of a downgrade.

A leak from Korea suggests the LG V20 will be high-end, except for the screen, which is said to be 5.5-inches and sport a resolution of 1,920 x 1,080. While it will feature in-cell tech, it’s still a significant downgrade. As for the rest of the LG V20 specs, it’s a different story as it should have a Snapdragon 820, 2-3GB of RAM and storage capacities of either 32GB or 64GB. 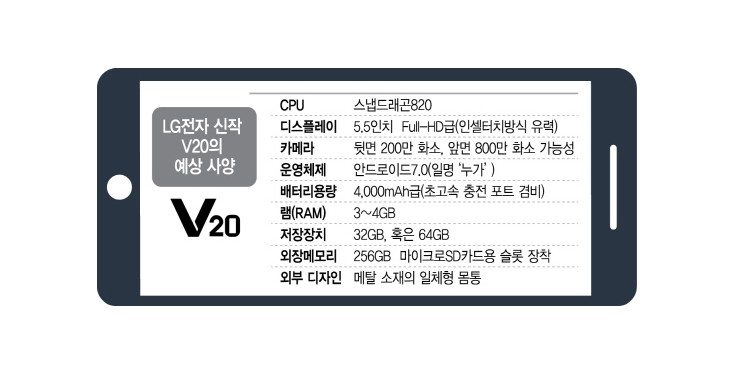 The storage will be expandable on both variants, and the cameras will be quite solid. The rear snapper is said to be a 20MP sensor whereas the front-facing camera is 8MP. A Type-C USB port, 4,000mAh battery and Android Nougat should appear as well, but there was no mention of a secondary display or a Dual Camera setup on the back.

The original V10 dropped in October with great specs and a cool secondary display. We have a hard time imagining LG going backward with the LG V20 specs, even if a few areas are improved. Either way, we should find out what LG has in store for us in a few months when the handset is expected to be released.