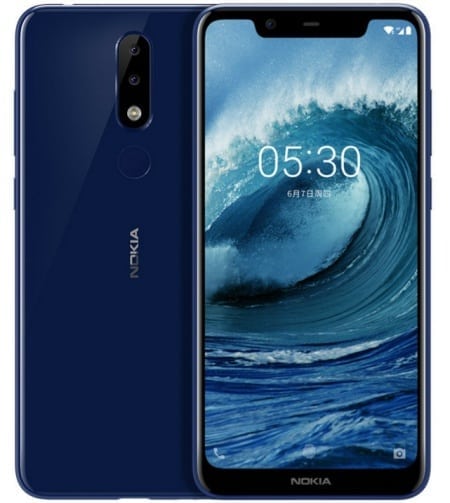 After a rather timid first year during which it released only a handful of Nokia-branded smartphones, Finland’s HMD Global threw caution to the wind in 2018, looking likely to reach a full dozen of new Android models.

Of course, the upcoming Nokia 6.1 Plus is little more than a rebranded X6 (or so we’ve been led to believe), while the 5.1 Plus and X5 should be one and the same device. Said device is now all but confirmed for an official announcement on July 11 in China under the latter name, and we also already know precisely how the mid-ranger is supposed to look.

Specifically, pretty much identical to the X6 from the back, and slightly different up front. Credible press renders reveal a familiar dual rear-facing camera setup, with a fingerprint reader located below the two “main” shooters, and oddly enough, a fairly wide screen cutout.

There’s absolutely no way this “notch” will be able to accommodate such complex 3D facial recognition sensors as Apple’s iPhone X, which begs the question “why make it so big?”. We have no idea, but we do know the “chin” is also large enough to house a Nokia logo, yet it’s not a complete turn-off.

After all, we expect the Nokia X5, aka 5.1 Plus, to be even cheaper than the already low-cost X6, with middling specs including HD+ screen resolution, anywhere between 3 and 6GB RAM, up to 64GB internal storage, 13 + 5MP dual rear shooters, a single 8MP selfie cam, and a 3000mAh battery.