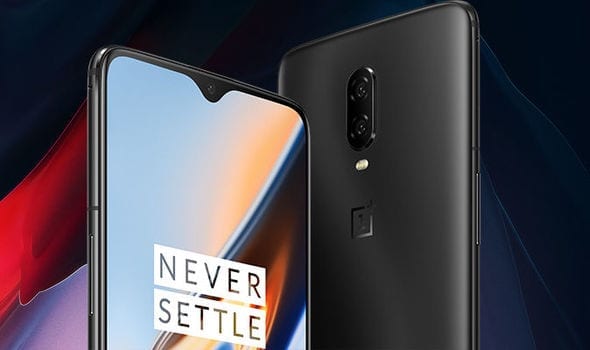 OnePlus was one of the first companies to bring a flagship device to the west, without the premium price. Named as the “flagship killer”, the OnePlus One started the affordable trend that we see in many different devices today. That device also pushed the company from a new, unknown Chinese manufacturer to now one of the most recognized companies from there. The OnePlus 6 offered again some of the best hardware found on a smartphone for an affordable price. Now, they announced the OnePlus 6T, their latest member to the family. Let’s take a closer look at it!

Starting with the design, on first glance, the device looks an feels the same as the previous model. However, there are few changes that make it distinguish from it. The body is made from aluminum, with glass on both the front and the back. The back one is frosted, similar to the one on the recent Pixel 3. It has nice curved edges that give it a premium feel in the hand. It comes in two colors: Mirror Black and Midnight Black, but there are some rumors of a purple color option coming up.

On the front, you have the 6.41” AMOLED display. It has 1080 x 2340 resolution and 19.5:9 aspect ratio. It does feature a notch as the one from last year, but this time it’s reduced to the size of a waterdrop. On the back, you have the same camera placement as last year – in the middle part of the top. However, you won’t find a fingerprint sensor here – it has been moved under the display, similar to the Vivo Nex.

Going inside, you will find the best hardware that is available right now. The OnePlus 6T runs on the Snapdragon 845 processor. Accompanied by the Adreno 630 GPU, this combination will bring you the best performance that is available on a smartphone right now. For storage, you have some options to choose from. For RAM, the standard 6 or 8GB appear, while for storage, you can choose between 128 or 256GB. Finally, the 6T features a bigger battery than last year’s model. The 3700mAh battery upgrade is warmly welcomed, and it will easily break through a two-day use.

For the cameras, you’re basically getting the same package as the OnePlus 6. The 6T packs in a dual camera setup on the back, with a single shooter on the front. Starting with the back, you get a primary 16MP sensor and a secondary 20MP sensor. Both have f/1.7 aperture, with the primary one having OIS and EIS. The main changes are on the software side, where you get some new additions. The HDR got the biggest improvements, while the app got two new modes. One can recognize faced and adjust lightning to simulate professional lightning, while the other improves night shots by reducing the noise and improving the clarity. As for the front, you have the same 16MP shooter with f/2.0 – perfect for all of your selfies or video calls. For video, the device can shoot up to 4k in 30 or 60 fps.

Finally, the OnePlus 6T comes with Oxygen OS out of the box, based on the latest Android 9.0 Pie. It packs in a lot of improvements and useful features, while remaining close to stock Android.

The OnePlus 6T is available for purchase now starting at $550. US customers can now also pick one up from T-Mobile.

So, what are your thoughts on the OnePlus 6T? Share them in the comments below.