Ok we all know by now that it is the iPhone 4G release date that we all want, but that will not happen until at least June 7 at the WWDC 2010 Event. So in the meantime whilst you wait we have found something else of interest in the form of ‘Video Calling’.

BGR has release a couple of screenshots of video calling capabilities on the new iPhone 4G / HD, earlier on today James reported about this but we wanted to add a little more to the mix. We already know about iPhone 4G or HD, whatever the name we know it is coming, we also know about iPhone OS 4.0 and that is coming also, we know that the new smartphone from Apple will have a front-facing camera if all rumours are correct. 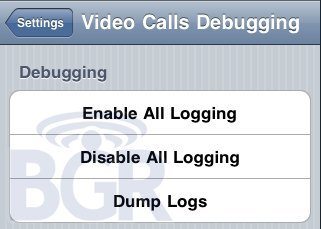 Ok so the screenshots does give us a little proof, but nothing is official until Apple mouths start wagging at WWDC 2010 so please take everything with a Pinch of salt. BGR got these images via a tipster who works for Apple (Oh you naughty boy/girl); field tests were being done when these screenshots were taken.

One quick thing to ask you all, if the new iPhone does feature video calling can AT&T handle the bandwidth, just a thought. Answer our poll question below and vote now.